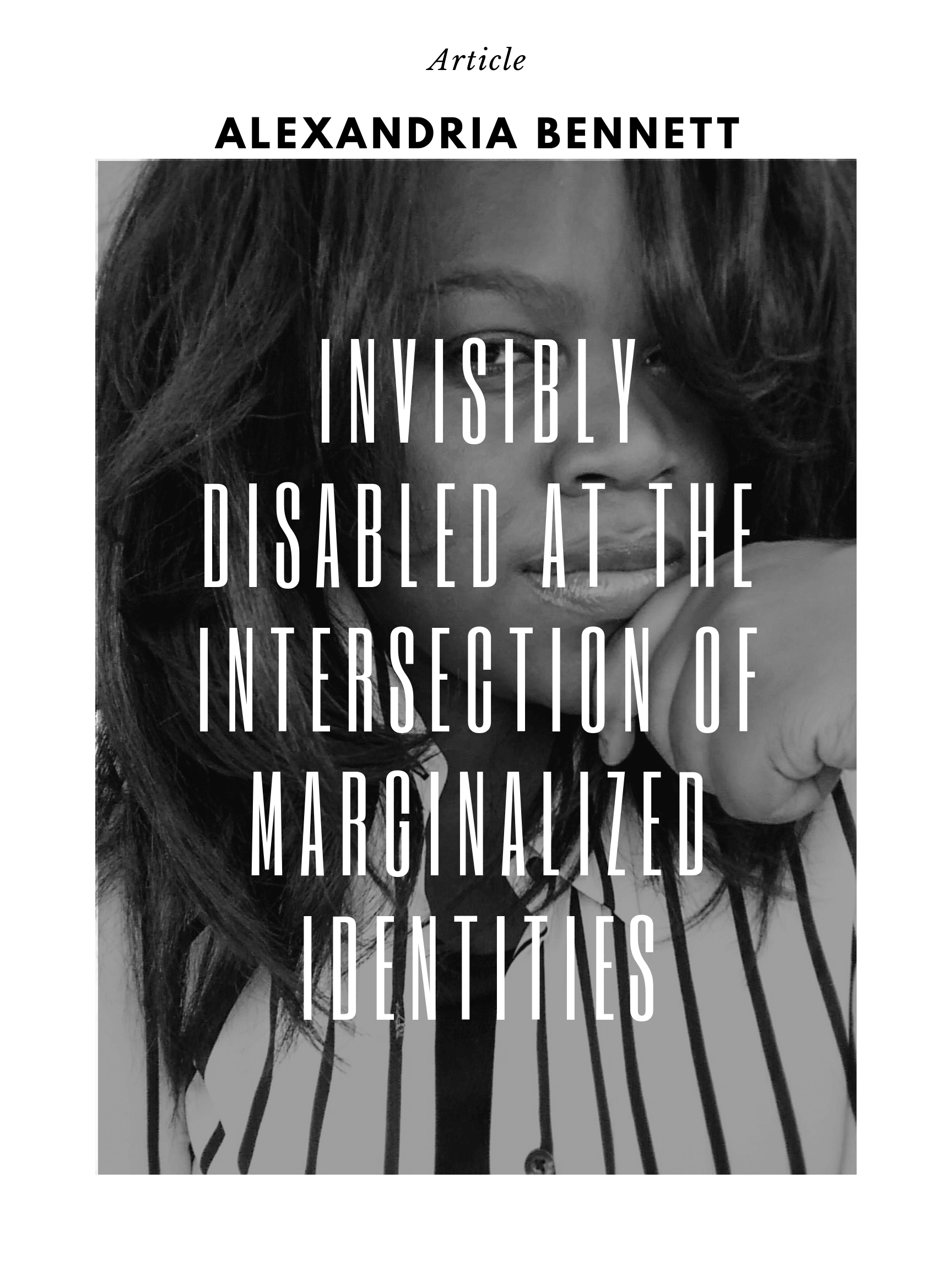 I knew something was wrong long before I was diagnosed. I was gaining weight. I was reasonably active or at least maintaining a certain level of activeness. I was a healthy eater. I didn’t fry anything but an egg and rarely that. I didn’t eat canned foods. I made baked goods with almond meal and smoothies with only soy milk and agave nectar. I sautéed my kale with fresh mango slices. And I was gaining weight. Continually.

Then I noticed I was budgeting energy the same way one figures out how long can their last $5 last them and on what. I don’t even know when it began. Just one day I realized that I was daily mentally negotiating: If I take a shower now, then I won’t have enough strength to get dressed and go to work. Gotta pick one or the other.

I’d go to bed at night. Sleep all night. A full night. Wake up in the morning. And within an hour or two, I was so sleepy, so exhausted, it felt like I had not slept at all. A tiredness deep in my bones that I can only liken to my last-week-of-full-term-pregnancy-with-an-eight-pound-baby-sitting-low-in-my-uterus tired. Every. Frigging. Day.

Something was definitely wrong.

The first folks to teach me that nobody gave a flip about signs of chronic illness in a Black woman’s body were the good doctors I saw at a west suburban Chicago hospital. I went specifically because of the weight gain. That was the red flag, oddly enough, that concerned me the most.

See, I was born with a congenital knee defect. I wore braces on my legs as a baby and walked fine, but somewhere around puberty, my knees started slipping out of place. After my father got me in to a specialist at The Shriner’s Hospital, I was given big shiny blue metal Forrest Gump leg braces and told to stop doing all the cool flexible stuff I could do with my legs because it was making it harder for my ligaments to remain tight enough to hold my knees in place. My teenage self, as can be expected, was not very gung-ho for these recommendations. And unfortunately, my knees never stopped slipping out of place and became even less stable anytime I regularly exercised. Then there was the little problem of not being able to breathe when exerting myself beyond walking due to damage from second-hand smoke as a child. And the thing about breathing is, it’s incredibly essential to being able to exercise.

That’s why the continual weight gain caused me the most alarm. Something was causing me to gain weight that had nothing to do with my actions or inaction, and if it continued, I knew my body literally could not engage in the very activities that could reverse the weight gain; i.e., lots of aerobic exercise.

So back to those good doctors at that hospital in Chicago. I came in. I explained the issue—that I had a job that kept me physically active, I had a healthy diet, never really ate junk food or very large portions, and I was incredibly concerned that I was continually gaining weight for what appeared to be no reason at all.

He processed nothing I said. He looked at my melanin and my Medicaid and decided that I was a poor Black fried chicken- and hog maws-eating caricature of an ignorant Aunt Jemima. To his admonishment that I not eat fried foods and change my diet and get exercise, I responded to the 400-pound White male doctor, “Sir. I can almost guarantee you that I eat healthier than you do. I already eat healthy. That’s why I’m here. I’m gaining weight, and it doesn’t make sense because of my diet and activity.” (And I mention his weight here not as fat shaming, but because: irony. So much hypocritical irony.)

Feeling desperate, I continued to list off my other troubling symptoms. He proceeded to tell me that he was writing me a prescription. He had run no tests. Taken no diagnostics. Done no due diligence. Ignored all patient history. And was writing me a prescription. He saw my melanin and my Medicaid and assumed I had not the education nor exposure to know what he was prescribing. He was wrong. I have a degree from Northwestern University and a career in a field that works closely with other disciplines such as medical physicians, psychiatrists and social workers. I work extensively with individuals with developmental disabilities and mental illness diagnoses. I knew what the prescription was. It was a psychotropic medication. And I knew the potential side effects included severe disruptions in psychological function. I literally would be putting my mind on the line.

“Sir. I know this medication, and the side effects are severe. You’ve not taken any psychological evaluations. You’re prescribing it for an off-label reason. I have no problem considering the medication. But if I’m going to put myself at risk, I just need you to tell me why you’re prescribing it.” He gave me no reason. He grew irate. He left the room and returned with a White woman doctor — his supervising physician — and they proceeded to angrily scold my refusal to do whatever they said like a toddler…and lecture me in the most infantilizing racist tone about not eating fried chicken and junk food. I was neither refusing to take the medication nor did I have a diet that regularly consisted of fried foods. But when all you see is melanin and Medicaid…

I was so traumatized by that experience that I did not attempt to seek medical intervention again for quite some time. It would be another four years before I would be diagnosed with lupus, Sjogren’s syndrome and fibromyalgia. The physician that diagnosed me sat in disbelief when he asked me if the previous doctors had run this test and that test, basic tests—and the answer to them all was “No, Sir. They didn’t.”

Lupus, Sjogren’s syndrome and fibromyalgia are three of many chronic autoimmune diseases referred to as “invisible illnesses” or “invisible disabilities.” Unfortunately, my story is not an unique fluke, but rather representative of the pervasive medical misogynoir that exists in America. Think Progress reported that “patients of color also received fewer recommended treatments for chronic illness, including HIV/AIDS, cancer, and heart disease. Differences in practitioner-patient interaction played a part in widening disparities.” And is any of it any wonder when one survey of White doctors revealed that some doctors don’t even believe Black people possess the ability to feel pain as much as White bodies do?

I think, for me, I often avoid outwardly identifying as disabled because frankly, in my experience, either no one cares or it puts me at even greater risk for things like loss of employment than I already am as a Black woman, especially in my field. I’ve already got a target on my back thanks to misogynoir. Adding disabled only sharpens the visibility of the bullseye. I’m a single mom that already feels like I’m running for my life. Publically or verbally identifying as disabled rarely protects me. It usually just makes me more vulnerable.

Someone might suggest that my not typically identifying as “disabled” is a form of internalized ableism. And that may be true for some who, in essence, utilize the societal privilege inherent in having a disability that no one can readily see (or at least not be able to see on a good day; bad days are a different story). But in my life, it boils down to what I can afford to risk. I have to survive. I can’t jeopardize my ability to feed my children. So I work hard to hide it and keep a roof over our heads because jobs have no incentive to believe the alternative: that I have a disability but can still be productive.

Thus, I rarely use the term to self-identify in the world. But every day, every pain, meds, every symptom I push and struggle through or some days don’t quite make it through like I hoped to reminds me in my private thoughts that I am disabled. I want to emphasize that my experience is just that — my experience. Does every Black woman with chronic invisible illness go through these things or deal with them the way that I have? No. Are Black women by and large subjected to and harmed by a medical system and community that is too anti-Black racist to effectively help us the way their Hippocratic oath demands that they should? Yes. And we all wade through that toxic water the best we can, the best we know how, to whatever varying degrees we are individually affected. Chronic illness is hard enough. Employer and medical racism makes everything so much harder.

1 thought on “Invisibly disabled at the intersection of marginalized identities”