This post is for my beautiful sistas of the African diaspora, and for the littlest sista who at 9 is already becoming far more skilled in wearing her mask than a little girl should be. But, like her mother, she already knows the spoken and unspoken rules required for us to take up space in these brown bodies.

I woke up to the news of the passing of Titi Branch; Titi was the co-founder of Miss Jessie’s Natural Hair Line. To be a Black woman in America with natural-textured hair is to have almost certainly at some point come across Miss Jessie’s products. Titi was still a young woman, just a few years older than myself, but what struck most people upon hearing this sad news was the news that Titi’s death may have been a suicide.

Whenever someone dies too young, it is always seen as tragedy, when someone dies by their own hand, we often don’t know how to process it. I think in the Black community where the cultural norm is to pray away the bad, we rarely acknowledge the unspoken depression and angst that lives in the closets of many strong Black women. With so much attention on the plight of Black Americans and the biased criminal justice system, too often the focus is on Black men and boys when the truth is Black women and girls are in a state of crisis too.

We know that Black women go missing and rarely do the stories of missing Black women and girls ever even make the evening news. We know that Black women are killed and assaulted by law enforcement. But rarely do we talk openly about the Black women who struggle under the weight of being asked to be strong. I am talking about the Black women who from the outside look together—the women who “beat the odds” and have all the markers of success by the standard of this society. Women who often feel too guilty to even talk about the deep pain of being asked to be everything to everyone while still living in this deeply racist and sexist culture that puts Black women on a third-rate stand at best. Women who can’t tell their relatives how that “good” corporate job feels more and more like a noose around the neck when those same relatives are still struggling to keep their lights on.  Women who often endure the subtle racism and microaggressions that eat away at your spirit piece by piece and thrown you in a downward spiral of malaise and depression.

The strength of the Black woman is a popular trope that rarely allows a Black woman to be honest with many people—or even herself—if she ever feels anything but strong. I know this struggle all too well myself—times when I have tried to reach out for help only to feel worse. When people expect you to be strong, the very act of revealing your vulnerability and humanity  feels like you are letting others down and creates a hamster wheel that is damn near impossible to get off of.

Yet it seems some of us are choosing to get off of the hamster wheel of being a strong Black woman by choosing to take our own lives. Black suicide has been researched by folks like Alvin Poussaint, whose book Lay My Burden Down discusses the mental health crisis in the African-American community. It’s a good read and it gives us real insight and ideas to curb this crisis, but how do we take it from the head to the heart? How do we do more than pay lip service to the idea of supporting one another? Even in Maine, our numbers are small, yet often the Black women here (I am guilty of this myself) are too busy to make time to just be with one another. If we can’t even take the time to create meaningful connections among ourselves, how can we have a support system when we are in crisis?

As Black women at times it feels we battle the world, each other and ourselves—and it’s killing us. Whether we consciously take our own lives or we go the unconscious route of shortening our lives which often is the result of not physically taking care of ourselves, something must give. I am tired of burying our men and sons but I am also tired of seeing too many of my sistas leaving the world far too early. Just as we are fighting now to make it known that Black lives matter we must create space for ourselves for our own Black lives—spaces and places that honor our humanity and support us in not just our high and strong points but at the low points when we need someone to know we are hurting enough that they come in to help hold us up, give us comfort and lend a caring and attentive ear. 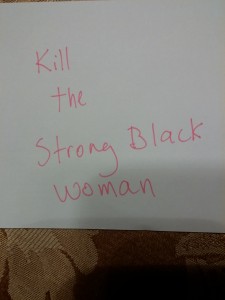