Dear Maureen and David DBA The Chef and The Gardener,

As you have not reached out to me or my estranged husband who emailed you after receiving your email from a few days ago, I have decided to write to you in this space.

The last time that my family dined in your establishment was on Easter Sunday, which was on April 5; we came for the brunch. After receiving Maureen’s email suggesting that I not return to your eatery, I sat down and talked with my estranged husband and I called my son who had been a part of our last visit to your establishment. I also checked my Instagram feed as I am a avid user of Instagram and sure enough, I found a picture that corroborated that we had indeed last been in on Easter Sunday. A day that frankly should have been joyous but that was frankly anything but joyous for my family.

Two days earlier on Good Friday, my family and I had been tooling about in Portland on that gorgeous early spring day getting ready to deliver some pretty heavy news to my son who was home visiting for the holiday and a much needed respite from his heavy travel schedule as a musician.  Our family day was interrupted when a carload of young white men decided to hurl that nastiest of words at my mixed-race family. To compound things, our ugly moment was witnessed by former WCSH anchor Jackie Ward who, in what she thought was a kindness, shared that shameful moment on her professional Facebook page. She did such a thorough job of describing my family that I awoke that Saturday (the day before Easter) to messages from friends and colleagues asking if it was my family that had endured that nasty moment.

In a moment that I still struggle with, I wrote a response to Jackie Ward in this very space that would propel both Jackie and I into a viral moment that even received international coverage. Not surprising, though, in a year that has been fraught with racial undertones.

So when  we awoke on Easter Sunday, we woke to a slew of messages and emails, many pleasant but some not that nevertheless created a pall over the day for us but we decided that we should still have our brunch, after all we still needed to eat.

When we arrived at your establishment, instead of the stellar service and delicious food that we had come to expect, we were met with a tentative and lackluster server and food that simply was not up to par. In those moments, it is always hard to know if one should speak up or let it go. I opted to speak up and yes, I can be curt and direct in a manner that is off-putting especially if one is used to the faked niceties that are the norm in this area; however, that is not my style. I am never disrespectful and most certainly not belligerent, especially as I had my children with me, but I did express displeasure at the meal. However, never did I see that one failed meal as a reason not to return. Rare is the establishment that doesn’t have the occasional off day. It happens, we are all human and honest criticism in my experience is often welcomed and never seen as a reason to effectively bar a patron.

When I initially called to make reservations for Thanksgiving, I had no reason to assume that anything was amiss. I figured that your filling up was sign of how popular your establishment had become. I honestly didn’t think anything until you sent me that questionable email which did make me wonder what was going on and whether you might have actively ignored our attempts to make reservations. In my original post from several days ago, I did not say that your actions were racist nor did I imply that you are a racist though I did say that in such instances, I do have to wonder if race is an issue. Especially since two days after my last visit to your establishment, my story and face appeared on the front page of the largest paper in the state and I do wonder if that fact colored your view and led you to believe perhaps it was best that I never return to your establishment for fear that a scene might be made.

However, it was your response on your Facebook page that prompted me to write this letter. You mentioned having the best of intentions and assumptions. I know a great deal about both of these and it truly boggles my mind that you would assume that I would not enjoy returning (especially since I was clearly trying to get a reservation). Honestly that is pretty presumptuous and I guess what I don’t understand is why would you not want me to return so that you could have the chance to get it right the next time? I have asked friends in the business and that is typically the standard…not effectively banning a customer. As to your comment about having Black family members, I would imagine in that case you know well how easy then it is to have a misunderstanding across the racial lines that could be seen as potentially racial, do you not? You had to know that telling a Black woman that she is not welcomed in your establishment is suspicious-looking, no matter what the intent. If you remembered me well enough to know I had not been happy during that visit, why didn’t you reach out to me to see how the situation could be corrected? Why didn’t you remember the many good visits I had previously for so many holiday meals? Thanksgiving 2014, my family dined with you and that year, we even sent friends of ours to you as well. I am surprised that only the bad visit was remembered and why banning was the solution. 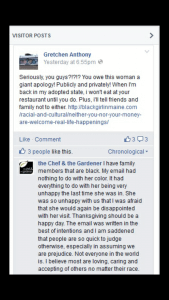 In any event, I don’t eat at establishments that doesn’t want me; I honestly wouldn’t trust the food to be prepared well at this point.  While we were able to secure reservations at a place that we enjoyed, your “well-meaning” (but hurtful and dismissive) email actually did affect our holiday adversely. In a year that’s been rough, we wanted routine and comfort and we didn’t get it. So while your intent may have been to wish me a happy holiday, it wasn’t. And frankly, I still don’t know how making decisions for me and deciding your restaurant isn’t a fit for us would be something you think I’d appreciate, since I’m an adult and know how to make my own decisions.

I do hope that moving forward, you think about how to handle criticism in a way that doesn’t make a patron feel humiliated and insulted.  Best of luck to you!

Shay Stewart-Bouley
———————————————————————————–
Black Girl in Maine runs on passion, a need to write, and reader support. If you enjoy the musings, I love it if you would please consider making a one-time contribution or becoming a monthly patron. Thank you.