“This aggression will not stand, Man.”– The Dude, aka Jeff Lewbowski

Several years ago, I officially gave up cooking holiday meals. It was around the time my son became a vegetarian and I realized that my younger kiddo really wouldn’t eat a vegetable unless it was on a cob, blended in a smoothie or under threat of bodily harm. After the first Thanksgiving dinner as a mixed meat/ no-meat family, I said the hell with it. The holidays already carried a heavy emotional weight but feeling like a line cook really wasn’t for me. It also wasn’t working for my family either since by the end of the day, I apparently was one step away from homicide based off the stories they have told me.

So we started looking for holiday places that could accommodate the entire family and low and behold, we stumbled across a hidden gem located a few miles away from the house. A true treat with food that satisfied everyone; in my family, to accomplish this is huge. Since typically when all four of us are together, someone goes back to the house and has to find something else to eat. This place was such a delight in our earlier visits that we eventually added it to our Mother’s Day and Easter roster of places to go. In many ways, The Chef and the Gardener became a part of our family’s traditions, especially for my 10-year-old daughter who associates holidays with a trip to that restaurant.

This has been a rough year for our family, we became a viral story after being called that nasty word, we almost lost my beloved father and then of course the decision after almost 20 years to take a marital hiatus. The estranged husband and I wanted to offer normalcy to our daughter’s life as she struggles with so many changes which will now include changing schools. So, as we always do, we are celebrating out holidays together as a family because we are still a family despite no longer sharing a primary residence.

In that case, I knew that a return trip to The Chef and the Gardener was in order despite the fact that the last time we were there earlier this year, neither the food nor the service was up to the standards that I had come to expect. Our last meal was a disappointment and I did speak up. No cussing, yelling or anything inappropriate, but I was honest; no longer do I silence myself in these moments. Nothing could have prepared me for the cost of that feedback.

Several weeks ago, I called to make our reservations as usual only to be told that they were all booked up. OK. We were disappointed but we figured we would find some place else to go. Granted, it seemed really early for the reservations to have been all taken up, based on past experience with them. I booked us for another place but realized that the menu was too “fancy” for the kiddo. Needless to say, if we are going to pay $150-plus for a dinner, I have no intentions of going home and cooking after dinner for the kiddo.

Back to the drawing board I go. On a whim, I look up The Chef and the Gardener on Facebook to see if they have any openings. Well sure enough, they have a few openings. I call their number and leave a message, I also leave a message on their Facebook page asking them to email me. No one calls me back that day, I call the next day only to be told that they booked those reservations already…strange but I don’t question it until today.

I woke up to an email from one of the owners (it’s a married couple). 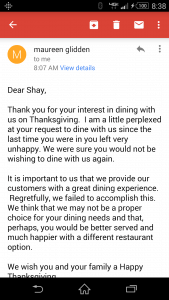 I had to reread this several times and then I shared it on my personal Facebook page and Twitter accounts because I was honestly gobstopped. You basically told me that I am not welcome at your establishment because I told you the last meal was not enjoyable yet I have had many enjoyable meals there so I figured it was worth giving you another chance. It was also critically important to give my kid a sense of normal in a year that has been anything but normal. I would swallow shit pies and nails to make my kid feel okay. Hence, I was more than eager to return to place that represents normal and tradition despite the lackluster meal the last time I was there. Besides we all have a bad day.

The truth is that I have never seen another Black person at this establishment, and that whenever a person of color (especially a Black woman) speaks up it is seen as “aggressive and even threatening” as we are often reduced to tropes…can you say angry Black woman? So despite the fact that while I was curt and direct in my feedback the last time I was at this establishment, it was seen as so “terrible” that I am essentially banned from their establishment.

Yet this behavior is nothing new: There is personal, structural and institutional racism. There are microaggressions. To be Black is all about that double consciousness that DuBois wrote about. Are the owners just grade-A jerks with poor communication skills and passive-aggressiveness or grade-A jerks with racist tendencies who would rather not serve a Black person who doesn’t deign to delight in just being allowed to dine at their establishment? I suppose I will never know.

In the meantime, let’s hope our third-choice restaurant is satisfying tomorrow and that new traditions can be started.
———————————————————————————–
Black Girl in Maine runs on passion, a need to write, and reader support. If you enjoy the musings, I love it if you would please consider making a one-time contribution or becoming a monthly patron. Thank you.