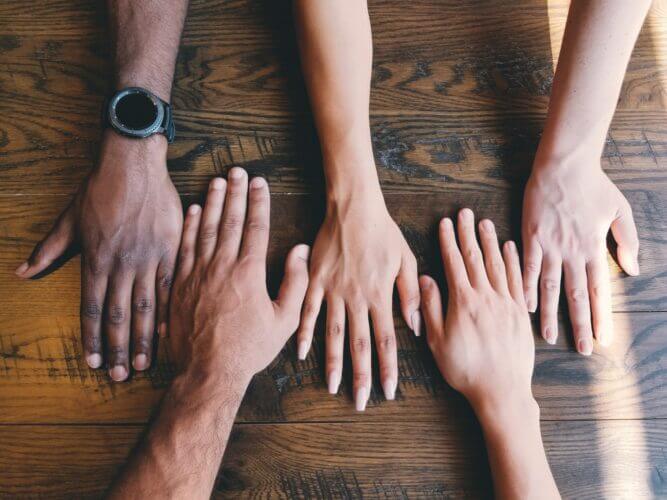 A few nights ago, I had a real-time exchange with a few local acquaintances that gave me pause—and reminded me once again of the work that white-bodied people need to do in anti-racism spaces. In short, the acquaintance, whom I had not seen in some time, was sharing that they had started following me on Twitter and that some of my tweets made them feel as if I didn’t like white people.

To be honest, it was a pretty heavy moment when all I was doing was trying to enjoy a cocktail after dinner. As a Black person, I like to have moments where I actually am just living as a fully embodied woman, who happens to be Black. Rather than, you know, as a Black person who is also fiercely committed to creating an anti-racist world. Sure, that second part is a big part of me, but it’s not all of me. Simply put, I don’t always want to be “on,” especially after 9:00 at night.

If you have read any of my work for any length of time, whether it is on the blog or a social media posting, you know that I strongly advocate for white people to work within their own communities with their own people. There are some who struggle with this concept. After all, aren’t you as a white ally or aspiring ally supposed to be in service to BIPOC people in the struggle for racial equity and racial justice? Yes and no.

Despite serving as the executive director of the oldest continuously operating anti-racist organization in the United States, I would be the first to say that I don’t have all the answers. After all, there is no certification or credentialing agency for anti-racism work. Recent years have given rise to the anti-racism sector and, well, there are a lot of folks doing this work. And while we all may share some common desires, we aren’t always in agreement.

That said, the organization that I represent has managed to exist for 54 years with some core beliefs about this work. One of which is that anti-racism work is relational. In my eight years at the helm of Community Change Inc., I believe wholeheartedly that this work requires we be in a right relationship with ourselves and our community, and that we ultimately will only build at the speed of trust.

However, that core belief is not universal in all anti-racism spaces. There are those who see the role of white people as transactional, rather than relational. Earlier in my own journey, I may have agreed with that, but long term I see it as a detriment to the larger movement.

Anti-racism work is not about trading places as far as who holds the power; it is about recognizing that white supremacy harms all of us, with the disproportionate level of harm falling on non-white people. Given that the culture of whiteness is already steeped in transactional relationships as a cultural norm and that has had so many deleterious effects, how does it create growth for white people or people of color if we use that model in anti-racism work as well?

You see this often in newly formed cadres of white folks coming together for racial justice. Rarely is there trust and relationship-building, but rather a recreation of the same harmful systems that got us to the mess we’re in right now. There is so much focus on the tasks that it can become a barrier to individual white people within those spaces growing and learning and becoming fully embodied white anti-racists.

Too often, what we see are white people who are well-versed in following the lead of whatever BIPOC person is calling the shots who exercises no discernment of their own. We see people who can parrot the latest lines of the moment, but what we don’t see or get is white people who are comfortable knowing they are white, through no fault of their own, but who are actively engaged and committed to dismantling whiteness and white supremacy both internally and externally.

As a result, there are still too few white people engaging within their spheres and communities. That means a lot of white people who may aspire to be anti-racist but who cannot make the mental leaps necessary to do so. They aren’t engaging fellow white people about the kinds of things they engage with me over evening drinks. Thus, they neither challenge their fellow white people nor are challenged themselves. And they don’t truly recognize the toxic elements of the rampant whiteness in our political, social, economic, and other systems.

So, questions like “Do you hate white people?” get asked of me, or variations of them. And these questions, as absurd as they may seem to some, are not absurd if you exist in spaces where white folks are never getting real.

I imagine in the aftermath of the great faux racial reckoning of 2020, there are a lot of white people who have tried to dip a toe into knowing more about race. The problem is that if they mostly keep themselves siloed in their racial justice spaces, rarely do they progress to cocktails and racism chat at 9 p.m.

I ended up unpacking the situation with a white girlfriend who, as she texted back, noted: These are white women with whom she needs to hold white communion with. Yes!

Your journey as a white anti-racist activist should be leading you to a place where you can hold communion with fellow white folks. I fully believe that white-bodied folks need to experience sacred space and communion with other white folks where they can unpack the horrors of white supremacy has inflicted upon them.

That way, they can talk freely without shame to one another and learn to trust, as well as to question if they are truly committed to collective liberation—which includes not just freedom for Black and brown-bodied folks, but their own liberation as white folks. How can you be anti-racism without working on your own healing?

It is only when that healing begins that we will begin the process of all getting free. Otherwise, we are just reshuffling the power deck and letting the loudest BIPOC folks taste the drippings from the sauté pan of white supremacy, while allowing white-bodied folks to cosplay or serve as the white savior flavor of the moment.

No, I hate white supremacy. I hate whiteness as a model and as a system and as a priority. I hate how white supremacy and the whiteness mindset dehumanized me before I was even born. I hate what it has done to my people in the global African diaspora. I hate how it steals and continues to steal from me. How it steals from me directly—even in this space, where a substantial number of people have consumed my work while pretending to be”good” whites, while never considering what this work costs.

I hate a system that made me hate myself, because the measuring stick of all things good and pretty never looked like me. I hate that I have had to spend most of my life unpacking race, when my white peers were allowed to be so damn ignorant of a system they are born into, which affirms their humanity every day, while making me fight for mine. I hate that white people revel in that ignorance insisting they are not racist, with no understanding of the structural framework that made them racist upon birth without direct intervention.

I rarely hate individual white people, but there are some whom I hold in deep disdain. The stench of racism permeates every pore of their skin and in most cases, they are so ignorant that they are a danger to me and people like me. I hate that with every anti-racism book sold, or blog written, there are still not enough white people willing and able to collect their own, to ensure that I don’t have to deal with those bigots. I hate that there are white people who assume because my voice is well known, I am privileged and therefore better off than them, and therefore proof that racism is not real.  I have white people in my life. Admittedly as I grow older, the circle of white people I can truly be comfortable with is pretty small. But no, I don’t hate white people.

Image by Clay Banks via Unsplash.