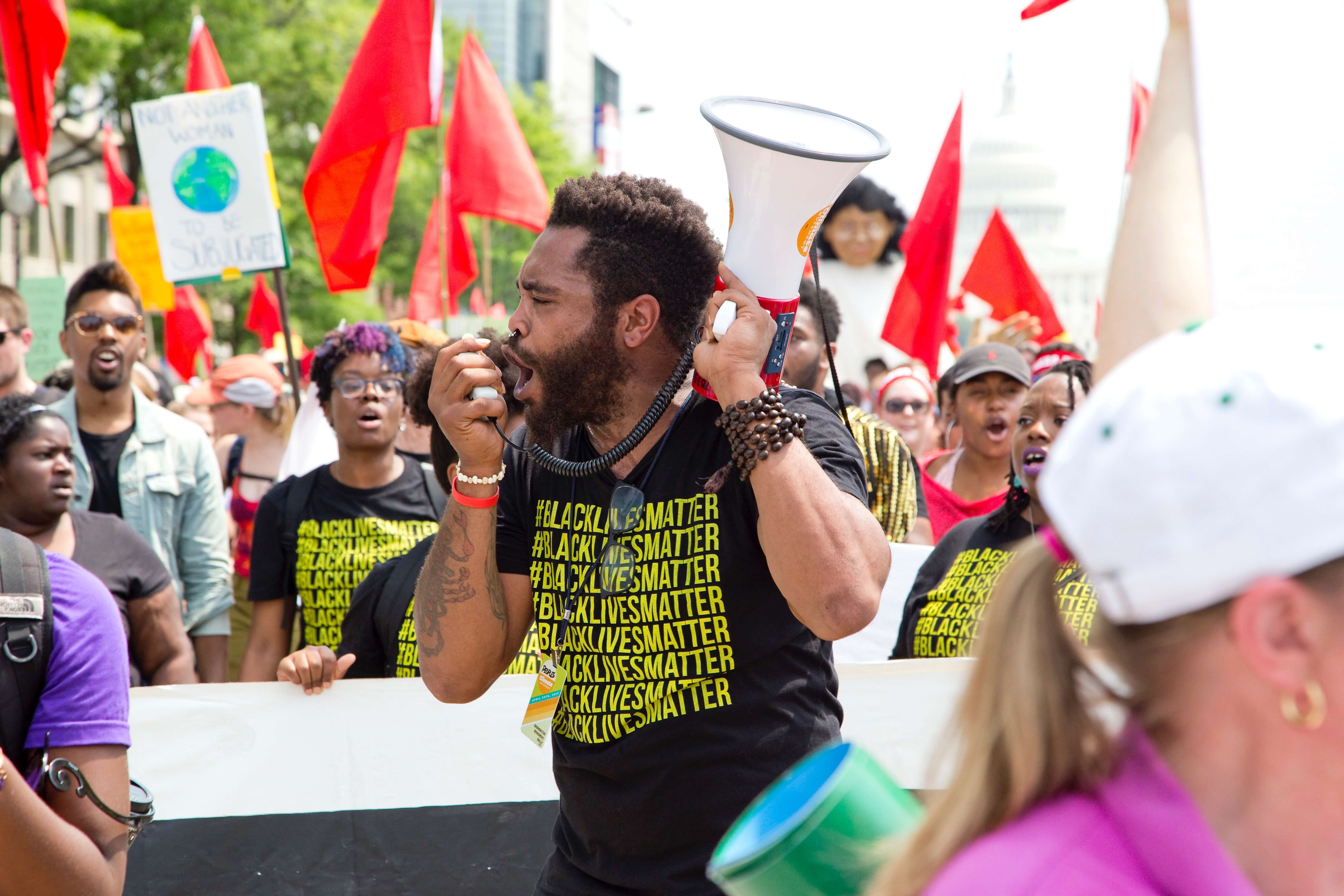 I can’t believe that it has been a year since that man took office in this country (this author refuses to acknowledge his name and is saddened by the fact that a staggering 52% of white women voted for him and are proud to call him their president). And it has also been a year since the 2017 Women’s March in Washington, with congruent sister marches all over the world.

While the “success” of the march can be found in the non-violent way mostly (white) women and men marched, there was backlash. But how? How can women and men peacefully marching be a problem? And why would others have issue with it?

And why has there always been so much more backlash at Black people and other people of color marching or launching non-violent protests that filled streets or malls or the like?

I’ll bluntly tell you why: People felt safer because it was mainly white women marching.

As much intersectionality as the founders and organizers of the Women’s March on Washington—Bob Bland and Teresa Shook—touted, it was only after backlash that additional organizers, Tamika D. Mallory, Linda Sarsour, and Carmen Perez, were added to round out the diversity. There was even more resentment, when the panel opened up to include others and basically asked white women to acknowledge their privilege. White women felt that they were being attacked and some even decided to not participate.

All of the above, initial ignorance to the need for more diverse representation in the organization of the March, as well as white women’s inability to acknowledge privilege in relation to this movement, resulted in women of color feeling slighted, as they should. (Another interesting fact is that the title of this march was originally going to be the Million Women March, erroneously taken from a similar march on Philadelphia in 1997, the Million Women March, which was organized by and marched for by African-American women celebrating their heritage. It was then changed.)

Then there is the public’s response to Black Lives Matter. BLM was formed by three women—Alicia Garza, Patrisse Cullors, and Opal Tometi—in 2013 after the acquittal of George Zimmerman, Trayvon Martin’s murderer. This group was created to try to vanquish systematic racism that has been prevalent in our world. So I ask: Why was this organization the target of so much hate from the start? BLM has been criticized as being anti-police, Rudy Giuliani has called the group “inherently racist,” and white people began to make silly sayings, such as “All lives matter” or “Blue lives matter.” referring to people in law enforcement. Umm, hi. Your lives have mattered for a very long time, it’s time to put aside your white-ass privilege and focus on lives that society has been systematically eradicating.

So how do these two groups get labeled differently? How is the Black Lives Matter movement “violent and against police” and the Women’s March on Washington a peaceful and hopeful sign? I think I know the answer, but I don’t want to beat a dead horse.

One is easy. One makes white people feel good about themselves and who they think they are and have always been. Joining friends on Saturday after brunch out with that new pink hat just crafted, posting about the movement on Facebook (challenging the external world and not the internal one). It also involves white people following and surrounding themselves with people who look like them in an almost social setting.

The other is hard and challenges who white people think they are; it shakes the core, and it doesn’t feel comfortable for them. It highlights unconscious bias and privilege. It involves white people following and rallying behind people who are different and have different life experiences than their own. But shouldn’t activism and real change feel uncomfortable and shake us to our core?

It’s almost as if being an activist has become just as trendy as a pumpkin spice latte. Rosie Campos, a writer for Medium, writes eloquently about trendy activism:

Our social activism is only stirred when it’s convenient for us. We love our lazy activism. We love our safety pins. We sit in the comfort of our homes and shake our heads in disgust as police brutalize and kill Black people. Good intentions. We post a few memes and our regrets on Facebook and call it a day. We leave it to Black people to fight their own battles.

I remember a few years back, when I was in art school (here I go again beating that poor horse), I was beginning to find all of these feminists of color, ones that looked like me and had similar upbringings. I was so incredibly excited to find women I could trust and rely on. However, as I started making work concerning these experiences—specifically centered on Latinx situations—it didn’t line up with the Eurocentric view held by my white instructors and some peers. So, long story short, it was misinterpreted, talked over, and disregarded as wrong.

The idea I presented in my work confused and probably upset some of my white peers and colleagues. They did not understand that having the privilege of being a WHITE person entered subconsciously into their brains and told them that I was wrong. It felt like the rug had been pulled out from under me. I had found my sisters In arms and then they were stolen from me.

What’s at the core here is the leaders and followers of the Women’s March on Washington couldn’t see past their privilege in a way to be inclusive to all women. To welcome and hear all of the stories, they needed to take a back seat to let someone ELSE speak. And they needed to listen humbly to that new experience, different from their own. I bring this up on the week after his first year in office, a week after the women’s marches, to show that not only has not much changed…but under his shaky hand, much has gotten worse.

Practicing intersectionality is essential to our well-being as a society from here forward. We must be inclusive to all: Black, Brown, LGBTQIA, Disabled. All of our voices need to be culled up against the tyranny they face each day. We need to be better to each other.

Photo by Vlad Tchompalov on Unsplash

6 thoughts on “I’ll see you nice white ladies at the next Black Lives Matters protest, right?”