Another week, another dead Black man and another white police officer who won’t face legal consequences for the taking of that life. Enough is enough…that was but one of the cries this week that led to nationwide demonstrations. In recent months as the racial tensions have grown in this country, I have watched from afar, commenting and empathizing but from the safety of my home (or office or train). At times feeling helpless and thinking that I must do more; it is not enough to write in this space or even to be the Executive Director of an anti-racism organization. True change often requires action and sometimes making ourselves raggedy, vulnerable and uncomfortable. It requires a willingness to step outside of one’s comfort zone and go from the theoretical to the practical. 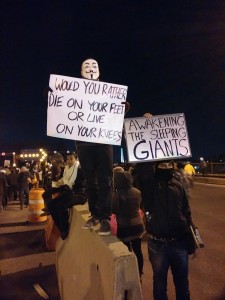 Little did I know that this week would present me with the very opportunity to do just that. I found myself Wednesday evening making the decision to cancel a planned Thursday night discussion at Community Change and instead asking people to take to the streets to stand in solidarity with those protesting in response to the Staten Island’s grand jury decision to not indict the police officer responsible for the death of Eric Garner. In asking people to take to the streets, I knew  that I too needed to take to the streets. Let me just say the last time I was part of mass protest was back before I had kids and considering that my eldest is now a grown man…well, it’s been a while.

However, I put on my walking shoes and was ready to go as I led a group from my office to the larger gathering at the Boston Commons. I was not prepared for the sheer volume of people: young, old, Black, brown, White and every shade in between. Standing and later walking in solidarity. The beautiful young Black and brown faces clumsy at times in execution but strong and on point in theme and resolve: We are tired, we will shut this shit down! 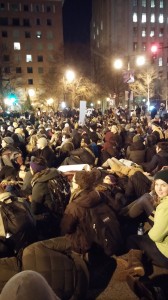 It was amazing to bear witness on a night that grew colder with each passing hour yet there was no surrender; not even at 10 p.m. when a portion of the group that I was involved with walked towards the cops with hands raised, chanting, nor when a group of protesters swarmed a police vehicle. Any fears that I started the evening with dissipated as the night wore on; instead there was strength in the collective group. A diverse, multiracial group that according to some reports was the largest mass protest held in Boston in at least a decade.

There were moments of discomfort (walking up towards I93 was definitely unnerving as I thought, “Are we really about to shut down a highway?”), and there were a few less-than-friendly faces we encountered (man on the Commons who yelled “Losers!” to me and a few of the people from my group) but overall there was support. Black and brown men in traffic who honked their horns in support. A middle-aged white man who got out of his car and stood with his hands up in support, a touching gesture even if I do question the wisdom of white people putting their hands up. 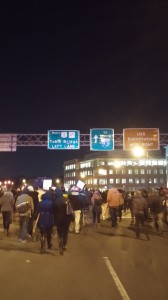 I left the evening thinking that we are bearing witness to a shifting consciousness, the rising of a generation saying that business as usual is no longer okay. That we as a society cannot continue to accept injustice that regularly assaults a portion of our population. The road to systemic change will be rocky at times and it will be hard, but we must be the change that we wish to see in this world.

2 thoughts on “Reflections on a march”