“I’m crying a lot and trying my best to feel safe, make my friends and family feel safe. I hope you tell the people of color in your life that you love them before they are murdered by police.”– My 22 year old son’s Facebook response to the St. Louis grand jury’s decision not to indict Darren Wilson in the death of Michael Brown

For several days now I have sat down and waited for the words to come but the truth is that the only thing that comes is rage and sorrow. Sorrow at the pain that Michael Brown’s mother, Lesley McSpadden, must be feeling. The collective rage of all Black parents and the sorrow at yet another dream deferred. A few days after the announcement that Darren Wilson would not be indicted in the death of Michael Brown, I attended a local vigil in Portland, Maine, and was struck by the collective pain in all the brown-skinned faces. A tired, bone-weary pain as I saw a young Black woman break down in tears.  The tears and sorrow on the face of the local NAACP chapter president as we embraced as Black women and mothers knowing that while we were mourning the loss of Michael Brown and the callous disregard for his life we were also mourning the hope that so many of us have had that one day we might be beyond race.

Ferguson has shattered us, and while we are a resilient people, we are also a people in pain. Yet it was in talking to my own beloved son that the pain became personal because unlike when he was a small child, he knows now that my words and promises are no longer guaranteed. I cannot keep him safe in a world that sees a 6’4 Black man as suspicious just for being tall and brown-skinned. He is a former philosophy major who is now an up and comer in the music business, garnering national attention and making his way in the world. A rising star, yet every time he is pulled over (which as of this writing was less than a week ago, and he’s been pulled over just for being Black so many times before that), he knows at that moment he could lose his life.

It wasn’t supposed to be this way. We are the children and the grandchildren of Jim Crow-era parents and were raised on hope that things had changed, that racism was a thing of a past, that we could go further, do more and live at peace with all. Yet that isn’t true, not when 12-year-old Black boys playing with toy guns on playgrounds are shot dead by police officers without a moment’s hesitation because a bystander can’t tell the difference between a child at play and a threat and the police somehow see a man instead of a boy.

I look into the face of my 9-year-old daughter and with each passing day realize that like my father before me, it is time…I must shatter her illusions and talk openly about race and how her skin coloring makes her suspect and how she must learn to navigate this dual existence. To raise Black children is to take a piece of their being and essence and crush it in the hopes that the ugly truths being imparted will keep them alive until adulthood and even with this crushing of the soul, there are no guarantees that they won’t end up taken too soon.

These are interesting times as I navigate racial justice work in my professional life yet feel the weight of racial oppression in my personal life. Wondering if the work that I do in my day life will manifest and create lasting justice for all…only time will tell. But I do know that for all the discussions and media buzz in the aftermath of another Black death, there is a yet another weight tied around the collective souls of Black people as we struggle to stand tall in the midst of pain and continue the fight as our elders and ancestors did. 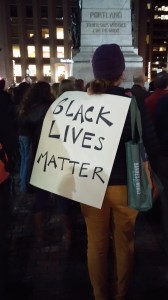