Times are a changing indeed. Back in the 1980’s when I was teenager we thought we were big shit if we had cable TV. I can’t even begin to imagine the trouble I could have brought down upon myself if I had the internet and things like Facebook; luckily I will never know and no one will ever see the pictures of me on New Year’s Eve when I was 16 and hanging out with all my pals who were tripping off acid while I proceeded to get drunk and lay on my friend’s (said friend is now a cop) bathroom floor. All my childhood mistakes only exist in the minds of those involved and the older I get those memories fade away. However I can say with almost 100% certainty that if the internets and things like Facebook had existed in my teen years I would have totally been caught showing off pictures of me and my teenage stupidity.

Today’s teens though are living in a different world, a world where so much of their lives is lived online. I was just at a meeting a few days ago with area youth providers and we discussed how so many of the local teens are living online. I have witnessed with my own eyes two or more teens sitting side by side, not talking to each other yet both on Facebook chatting on Facebook with each other…I gotta be honest the first time I saw that at work, I was speechless. Now it is a norm.

Kids are connected digitally, they text, Facebook, IM, you get the picture. Rather than getting together in real time, they share their lives virtually and that means both the good and the bad. For parents, it’s a brave new world. I am fortunate that with my 20 year old I never worried much about his online use but with one more kid to raise I do wonder what the digital future holds.

It’s starting to become common that we hear of kids misbehaving when it comes to their online privileges and increasingly we have parents doling out their punishments online as well. Just a few months ago, we had the dad, Tommy Jordan who decided to film himself shooting his daughter’s laptop after repeat rule violations with regards to her online usage. Many were in an uproar decrying that dad was an abuser; I wrote my thoughts at the time. Today we have ReShonda Tate Billingsley, an author who decided to post a picture of her underage daughter holding a sign stating that she basically lost her online privileges since she had been caught holding up bottles of alcohol online. 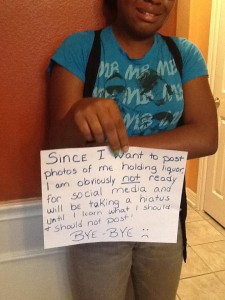 This situation was brought to my attention on twitter by a tweep (h/t to Snarky who tweeted this photo) who deemed the mother a cyber-bully and troll. I actually asked real life pals who happened to be parents their thoughts and none saw the mother as a bully; some admitted that they might not have posted the punishment picture but that maybe digital crimes requite digital punishments. I asked the Spousal Unit his thoughts and he posed the question, is a public shaming online in this manner any different than in the old days when you were grounded and your parents told everyone who called or stopped by that you are grounded?

As a parent we want to keep our kids safe, and the thing with online fooling around is that we leave a digital footprint, one that can last and be accessible far longer than my drunken escapades at 16. We know that in 2012 people lose or are denied employment based off what they do online. In many ways as the world becomes smaller with technology we don’t have nearly the freedom those of us who grew up before the digital years had. Is a parent a bully for fighting online offenses with their online strategy even if it involves shaming? Is this merely a new form of tough love? I admit I am torn, I am not a fan of shaming but frankly there are times as a parent you will do anything to reach your child. Is a momentary shaming that reaches the kid worth it?

In this brave new world, I suspect more and more of us will be parenting by Facebook.