I sometimes feel that as an African-American woman choosing to live in a rather homogenous (okay, very white) state is a brave choice. In my decade in Maine I have had many well-meaning friends and family members ask when I will be leaving; that’s a good question. To be honest I don’t know. When I landed here in 2002, my plans were to leave as soon as my son turned 18 and I was no longer bound by joint custody arrangements. The problem with plans however is that life happens and often life doesn’t care squat for our plans. It has taken me a long time to learn this and in my case when the dust settled from life happening, I was left with the reality that I no longer had a “home” to go back to. For me wherever I lay my head and plant my feet is my home.

Living in Maine has been a learning experience for me, because it has meant pushing myself to the edge of my comfort zone. Look. I am from Chicago; I am a Black girl with a splash of Mexican so coming to grips with choosing to plant my feet in Maine was an adjustment.

The longer I live here, the more it becomes home, it fits my current stage of life but…. there are times when it is hard. I was reminded of that on Election Day when the Man Unit asked me did I have identification. Mind you I have been a registered Maine voter since we moved here in 2002 and I have never had any problems at the polls so there was really no reason to expect that I would have any this time. Yet knowing about voter suppression tactics across the country I was taking no chances and made sure I had plenty of identification and for good measure I decided to snazzy myself up and act like the almost forty year old that I am. 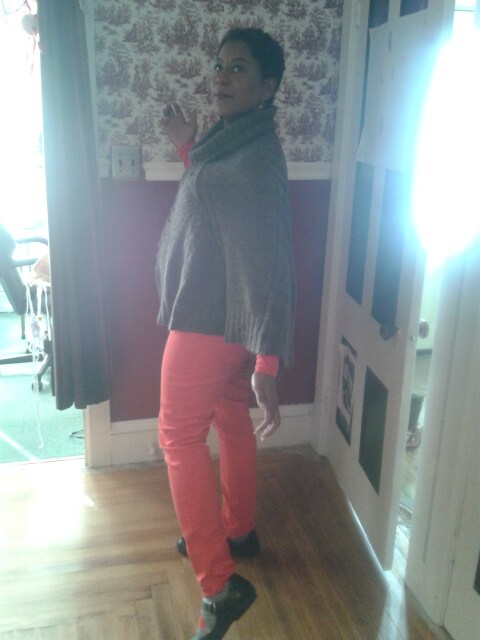 In the end I had no issues at the polls, in fact, it turns out I knew several of the poll workers from my professional work and color me red, but there was even a woman of color working the polls.

I share this because on Election Night, I was on twitter talking with a fellow Maine blogger, SoapboxNoise, and it turns out that our preparations for voting were exactly the same. So much so that she has written a great post about voting while Black in Maine. Sadly we did have one reported instance of attempted voter suppression, where a poll worker felt something was wrong when two Somali woman attempted to register to vote. Thankfully Gervis and his “feeling” backed down.

After the results of the election came in and I could breathe again, I probably would have been happy to put this election season behind me. But last night I got a message from a local mom who is raising a child of color. Her child was called a nigger by another child; the day after the election…in a state that voted for Obama and made same sex marriage legal in 2012.  A child called another child a nigger…think about that.

It would be really easy to say that Maine is the problem, after all this is a pretty white state but this is bigger than any one state. See, the first time I was called a nigger, I was a teenager in Chicago and a little white kid pointed to her Mama and said “Look Mama, a nigger.” Chicago does not lack for Black people despite the fact that it can be segregated in many ways. Yet some of the worse racial incidents in my life all occurred in my beloved Chicago including the tine when a police officer stopped the Man Unit and I when we were still very much newlyweds and intimated that I was a prostitute. After all why else would a white man be in a car with a black woman at nighttime unless she was a sex worker?

Yet despite these instances I continue to believe in the goodness of most humans and trust that one day my great grand-kids will hear stories like this. Much like the ones my father has shared with me about picking cotton and poll taxes and they simply won’t compute because the times have changed. In the meantime, that change will take time and I will continue to be the fly in the buttermilk.