I never imagined when I moved to Maine in 2002 that talking about race, racism and race relations would be something that I would do with regularity. In many ways, coming from Chicago, I had spent years in my own silo, one that was rich with diversity and where my presence was not alarming, different or “othered.” Choosing to talk openly about race in a state where non-white people make up less than 10 percent of the population is a risky proposition. It makes you a very unpopular person who is alarming, different and often perceived as a troublemaker…and it most certainly doesn’t make you many friends. Needless to say, my social calendar stays pretty empty. I have few regrets, despite the occasional moments of sadness when I see the impact upon my family and the utter isolation in which we live, but occasionally something happens that reminds me that there is value in raising our voices for the collective good.

In recent years and months, I have seen more of my fellow Mainers speaking out about racial injustice. Too many times, there is an assumption that because the number of non-whites in this state are so few that racial bias has no place in our lives. The reality is that racial bias in Maine is real and it takes many forms. My friend, blues man Samuel James has been raising his own voice as a Black man raised in Maine to talk about the racism he has faced and continues to face. As more of us raise our voices, it gives us the strength to stand tall even when we face opposition.

However, it is the actions of a group of high school students in Lewiston, Maine, who have me convinced that change is coming…even in a state like Maine. With demonstrations taking place across the nation, few would expect them in a state like Maine but demonstrate we did. Last weekend, we had two demonstrations, one at which I had the honor of speaking at and meeting some of the courageous young people of all races who are working for racial justice across this state. Which is why, when a few days later when one of them reached out to me about a situation at Lewiston High, I was alarmed. 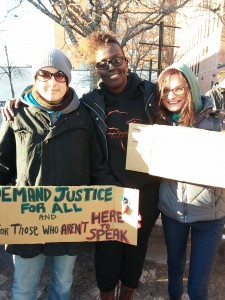 Several students put up a poster in the high school to raise awareness about the racial injustices that disproportionately affect Black people using the slogan that has emerged in this struggle based off the Twitter hashtag #BlackLivesMatter. The students were told that using “Black Lives Matter” is divisive and ordered them to take the poster down. Of course, the complaints are that all lives should matter and when we only focus on the plight of Black Americans, we are creating racial divisions. In theory, all lives should matter but in reality all lives don’t matter equally. Much like George Orwell’s novel Animal Farm, some of us are perceived to have more value than others. In a year that has seen record numbers of Black lives shot down before their prime, Black women sexually assaulted by law enforcement and Black children marked for failure before they can even spell their own names, calling the slogan Black Lives Matter divisive ignores the reality that Black lives seem to have little value in our current day. Many white Americans have already divided Black people out to label them as troublemakers or criminals because of the color of their skin alone, divided them out as being less deserving of rights and safety when police are involved, and dividing them out by trying to silence them when they even try to discuss race. Black people and their non-Black allies want discussion to bring people together for once across racial lines.

How talking about an issue can be divisive is beyond me. To acknowledge and discuss inequity does not create inequity any more than discussing cancer leads to the creation of more cancer. Such thinking is faulty at best and downright insensitive and insulting, and it often reveals the racial bias held by the person who dares to utter such things.

In the day of the viral story, the plight of the students in Lewiston was picked up and went national; not long after, the school reversed its decision and are now allowing the students to put the poster back up. The community is planning a forum on the matter sometime in January. Based off comments in the local paper, I imagine it will be a lively forum since many feel this sort of “thing” has no place in our public schools. Yet I can’t think of a better place for such action.

These brave young students are our future, they are connecting across racial lines and having the types of discussions among themselves that many of us who are much older won’t even dare to have with our family, friends or even ourselves. Social change is often guided by the young; as I went to two marches in five days and realized that my marching and chanting days are almost behind me, if for no other reason than how tiring they are physically. I am heartened to know that even in a state like Maine, there are young people daring to break out of the silo that society has created for them and work across racial lines to speak truth even in the face of pressure to be quiet. I salute these young people and I pledge to assist in any way that this old-head can.