Over the years the feedback from readers whenever I write about matters of race has ranged from appreciative to downright hostile. There is a certain segment of people both in my readership and in the general public who believe that racism will die if we simply stop talking about race and instead see each other as members of the human race. This is naive at best and downright deadly at worst.  Ignoring problems or situations no matter how uncomfortable they are never leads to the situations or problems solving themselves. Trust me, I’ve tried it and not addressing my health or my finances led to disaster and I suspect that I am not the only one. Ignorance isn’t bliss, no matter how good it feels to stay in the dark.

2014 is turning out to be the year where Americans, specifically white Americans, are being pushed to the brink when it comes to racial matters. It is no longer enough to not be personally racist, to raise your kids to be color blind, and to not use the n-word. It isn’t enough to avoid certain conversations because they aren’t comfortable and they feel awkward. We are officially living in a two tiered system of existence where there is the white world and then there is the space where people of color, particularly Blacks, live and these worlds are not equal.

To see just how unequal these two worlds are, one need not look any further than this past weekend’s Pumpkinfest in Keene, NH. Just the word Pumpkinfest evokes images of a crisp fall day with warm, fuzzy sweaters, warm cider, pumpkins and family time. Keene, NH is the quintessential New England town and I should know because I went to graduate school in Keene. Keene is a  gorgeous wisp of a city near the Vermont border that is overwhelmingly white, laid back and rather liberal.

Apparently the annual Pumpkinfest held by the city is the premier event for students from Keene State College as well as visitors from near and far to come and have some fun. I dig it, everyone likes to have a good time and when you live in Northern New England you want to load up on fun before Ole Man Winter bursts on the scene. Once winter arrives in my corner of the world, you can kiss fun goodbye unless you are one of those hardy souls who likes to play in the snow.

However this year’s Pumpkinfest took a detour and participants around the city decided that throwing bottles, setting property on fire and basically becoming as destructive as they could be would take the festival to the next level. It seems that some had billed this year’s Pumpkinfest as a destination for destructive and raucous behavior.  In other words, in this predominantly white community, the predominantly white attendees decided that having a riot under the guise of a party sounded like fun. 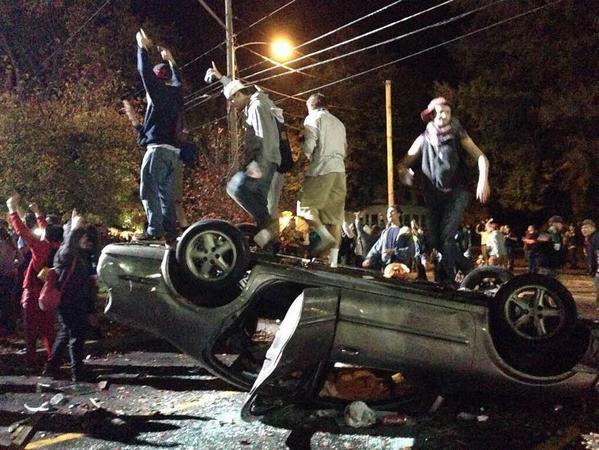 As Steven French, told the Keene Sentinel that he traveled from Haverhill, Massachusetts to attend the festival because he knew it would be “f*cking wicked.”

“It’s just like a rush. You’re revolting from the cops,” he continued. “It’s a blast to do things that you’re not supposed to do.”

In some ways it’s not surprising to see someone share such views, have you ever seen the aftermath of a hockey game when folks are riled up? When white folks let loose, rarely are their actions seen as an indictment on the white race and often their actions are described with words such as “unruly behavior” and “melee” both words used in the media coverage of Saturday night’s ill fated festival.

By comparison, one doesn’t have to look far to see how the lens is shifted when the people engaging in what might be considered “unruly” behavior are not melanin challenged. Just google Ferguson, MO or Michael Brown. Ferguson, MO is a city that has been on edge since a Black teenager was shot and killed by a police officer in August and his body left on the street for four hours as his blood pooled in the street. In a city that is majority Black yet controlled by whites, Michael Brown’s death was the tipping point and acts of civil disobedience have been the norm since Brown’s death. Yet most of the media coverage presents an image of Ferguson residents and protesters that leaves a bad taste in the mouths of many, particularly white Americans and really it is not surprising at all.

Power in America is held by Whites and as such, Whites frame the narratives that affect us all even when we aren’t aware of those narratives because white ways and white thoughts are seen as the norm. For most we don’t even question that assumption. White people see these “truths” as natural and People of Color spend our lives striving to be acceptable as set by the norms of white ways.  Unruly young white adults who are actually engaging in threatening behavior are perceived as “kids” blowing off steam whereas an actual Black juvenile is perceived as a menacing threat who even when found to be unarmed “deserved” their death. This is the world we live in and despite the hand wringing that has abounded in recent years and months when racialized incidents happen most of us are too wedded to the system that privileges us to do anything more than kick up a little dust online and stay safe in the cocoon of whiteness that privileges.

But ignorance is not bliss as I said earlier and by “staying woke” as the youngsters say we have an opportunity now before this system of inequity reaches the boiling point and endangers us all. However letting the scales fall off our eyes no matter how uncomfortable is the first step to creating systemic change.