One of the downsides of being recognized as a Mommy blogger (a title I still argue with) is that my inbox is constantly flooded with PR pitches that are clearly the result of someone not taking the time to actually read my blog. (Hello!!! I don’t have babes in diapers, why would I care about diapers?) Or I hear from people asking me if I would talk about their cause on my blog. Occasionally though someone will contact me and it’s about an issue, I can truly get behind and that was the case when Michele Stephenson an African-American filmmaker in Brooklyn contacted me about a film that has been 12 years in the making. By now we all have either heard or seen Waiting for Superman and generally know about the dismal state of education for Black youth in this country or at least the stories the media feeds us.

Well, Michele Stephenson and her husband Joe Brewster have their own story it’s about their son and his journey attending a prestigious, predominantly white prep school on the Upper East Side of Manhattan.  Here is Michele in her own words. 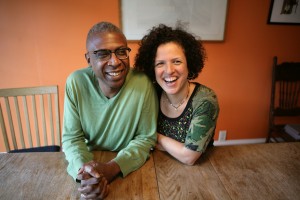 Can you imagine spending 12 years shooting a film about your own family?  Joe Brewster and Michèle Stephenson, an African American Brooklyn-based husband and wife filmmaking team, have been doing just that since 1999. Their film, American Promise, is about race, education, and achievement; it will air on PBS in 2013. Visit the American Promise Kickstarter page today to learn more.

When people first learn that we’ve been filming our son, Idris, and his best friend, Seun, since they entered kindergarten in 1999, reactions usually range from sympathy tinged with judgment (“I would never have the courage to put my family through that!”) to admiring disbelief – usually from other filmmakers (“I can’t believe you have the endurance and tenacity to go through it. You guys are brave”).  Well, we can’t believe we put our families through this and we also can’t believe we’ve had the endurance to get through 12 years of filming. It has been truly difficult balancing our filmmaker hat with the responsibilities of parenthood. That said, our biggest concern has always been about our son’s own agency in this project.

Our film is about Idris and Seun’s experience as African American boys attending a prestigious, predominantly white prep school on the Upper East Side of Manhattan. This is not another Waiting for Superman; access to opportunity is not the issue. American Promise opens with Idris and Seun beginning their education at one of New York’s finest schools, but over 12 years, their educational journey proves to be more complicated than any of us had anticipated. And it’s all caught on camera. 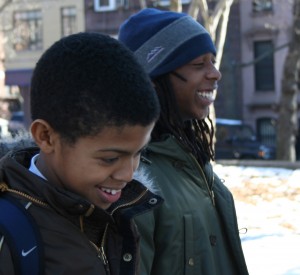 In an attempt to chronicle the coming of age of these boys, we’ve been challenged as filmmakers, and as parents. We often wanted to turn off the camera and spare the boys during times of discomfort, pain, and uncertainty – from fights over homework and times of personal tragedy to every day teenage awkwardness. But we committed ourselves to this challenging filmmaking process, and now after 12 years, we are finally going to give audiences a never-before-seen look into the lives of two boys growing up over the span of two hours.

Airing on PBS in 2013, American Promise will be the central pillar of a transmedia campaign that will use film and other media as tools to bring together forward-thinking nonprofits, foundations and leaders dedicated to empowering black males—creating change in young men and in the public consciousness.

Help us finish American Promise. Five bucks is all we’re asking (that’s one latté). We have two more weeks to raise $25,000. If you can’t donate, please spread the word and let your network know about the film. Thank you.

Please consider supporting this amazing project and spread the word.