I rarely do guest posts here since the timing never quite works out, but I am honored to have author Sarah MacLaughlin here in this space. She is writing on the heavy topic of talking race with the kiddos, Sarah is also doing a giveaway of her book What Not to Say: Tools for Talking with Young Children so please leave a comment so you can be entered to win the giveaway. 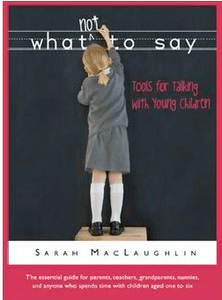 Talking with Children about Race and White Privilege

By Sarah MacLaughlin, Parenting Expert & Author of the Amazon bestselling book, What Not to Say: Tools for Talking with Young Children

My son said something that truly shocked me the other day.

“Mommy,” he piped up from the backseat in his sweet little voice, “I don’t like people who have different skin color than mine.” I somehow managed to stay on the road, cover my disbelief, and respond as calmly as I could.

“Why is that, sweetie?” He explained how he hadn’t liked someone he’d recently met. He attributed his dislike with her skin color. Apparently four-year-olds sometimes make sweeping judgments and generalizations. I continued to play it cool and tried to broaden his view by validating that it was fine for him to feel unsure of new people, but also suggesting that his hesitation may not have had anything to do with the color of her skin.

In a light tone, like I was just letting him know, I said, “It’s actually kind of important to not decide things about people based on the color of their skin.” Then I spent a few moments reminding him of the non-white people in our lives—noticing what a short list it was. How did that happen?

Well, we moved to Maine, I guess that’s how. Maine is one of the whitest states in the country. When I first lived here in the mid-eighties, my rural high school was 100% Caucasian (and 97% Christian, noted the Jew, but that’s a different post). Arriving from California, I found people to be downright racist. Things have progressed a bit since then, and of course Portland, Maine has gotten much more diverse, though racism is still rampant.

I grew up and spent most of my adult life in and around San Francisco. I spent my childhood interacting with people of different backgrounds and colors (and also sexual orientations.) When I first moved to San Francisco at age 19, I once found myself in a situation where I was the lone Caucasian. That was an eye-opening experience. It did not feel particularly comfortable to be the “only” in that situation—a place many people of color find themselves every day.

In a Women’s Studies class in 1991, I was introduced to Peggy McIntosh’s essay, White Privilege: Unpacking the Invisible Knapsack. Ms. McIntosh’s clear naming of the “package of unearned assets” that those in the dominant class and culture possess was appalling. I was floored, and deeply embarrassed to have simply not noticed. I was oblivious to huge variations in the not-at-all-level playing field. I can assume that if I am turned down for a job, it is because of my lack of qualifications, not because of my race or color. I had also not noticed small inconveniences and biases: the lack of proper Band-Aids for darker skin, or the peach-colored crayon labeled “flesh.” (This has since been changed, and you can now buy a lovely box of Crayola “people” shades.)

This was a truly painful mirror to look in at the time. And I guess I found myself looking in it again when my son commented about skin differences in such a way. So, I’m paying more attention—aiming to deepen my awareness of my own privilege. I spoke to a biracial friend about what Joshua had said, and how horrified I had been. He assured me that comparing and making judgments is a typical thing for a preschooler to do. He consoled me with tales of his own mixed-race daughter making blanket statements about not liking black people. Oh dear.

A few things to keep in mind when discussing color, differences, and discrimination with young children:

Don’t ignore color. Research shows that aiming for a “colorblind” culture is misguided. You miss the opportunity for many rich conversations. Plus, kids aren’t blind. If they see differences and we ignore them, it creates an incongruence that is puzzling. Point out differences and talk about them. We are not all the same. And sadly, our world is not one where all are treated equally.

Acknowledge discrimination and privilege. Point out unfairness. Promote media literacy by highlighting just how many white people are represented in the mainstream media. Question the poor representation of racial and ethnic diversity. Notice and discuss the demonization of dark-skinned people in Disney movies.

Embrace diversity whenever possible. Don’t assume that white is the norm. Look for toys and picture books that include people of color. (Unfortunately, it is harder than it sounds.) Also, remember that history can always be told from multiple perspectives. When you tell children “facts” about our cultural past, try the caveat, “This is the commonly told story.”

Obviously, these tiny changes aren’t going to create instant world peace among all people. But even small changes in awareness and action can make a difference. Big shifts can be made incrementally. The other day we were driving again, this time listening to the radio. The DJ came on and made some announcements, finishing up with their station tagline—“Different is good.” Joshua perked up and asked me, “Why did that man say that different is good?”

It may have been overkill, but this is what I said in return: “They said different is good because lots of people in our world think that different isn’t good. Some people think everyone should be the same. Isn’t that silly? They’re talking about music, but it’s true for all kinds of things. Some people believe that those who look or seem different are scary or bad. It’s important to notice when things are different and embrace them anyway.” He gave me a long look and said, “Okay Mommy.”

Obviously, we’ll keep working on it.

Please comment on this post. Your comment enters you in the eBook Giveaway — to win an ebook copy of What Not to Say: Tools for Talking with Young Children in the format of your choice: PDF, epub, or Kindle format. Sarah will be giving away one copy at each blog stop and will announce it on the comments of this post within a few days. Be sure to leave your email so we can contact you in case you’re the winner!

Other stops and opportunities to win during this Blog Tour are listed on Sarah’s blog here: http://sarahsbalancingact.blogspot.com/p/blog-tour.html.

Also, you can enter at Sarah’s site for the Grand Prize Giveaway: a Kindle Touch. Winner will be announced at the end of the tour after July 15th. Go here to enter: http://sarahsbalancingact.blogspot.com/p/blog-tour.html

Sarah MacLaughlin has worked with children and families for over twenty years. With a background in early childhood education, she has previously been both a preschool teacher and nanny. Sarah is currently a licensed social worker at The Opportunity Alliance in South Portland, Maine, and works as the resource coordinator in therapeutic foster care. She serves on the board of Birth Roots, and writes the “Parenting Toolbox” column for a local parenting newspaper, Parent & Family. Sarah teaches classes and workshops locally, and consults with families everywhere. She considers it her life’s work to promote happy, well-adjusted people in the future by increasing awareness of how children are spoken to today. She is mom to a young son who gives her plenty of opportunities to take her own advice about What Not to Say. More information about Sarah and her work can be found at her site: .