When I moved to Maine in 2002, I did not set out to become one of Maine’s best known Black residents. I was simply a mother who didn’t want her child to be caught up in a protracted custody battle. Yet when I arrived here in the spring of 2002 from Chicago, the casual racism that I dealt with on an almost daily basis threatened my very being. Knowing that I was committed to being in Maine, I decided to do something about it, thus launching my writing for publications such the Portland Press Herald, Journal Tribune and eventually the Portland Phoenix where I have written on race and diversity for over a decade now. This blog came along 6 years ago and while the initial intent behind the blog was not to write solely about race with a name like Black Girl in Maine, it’s hard to avoid matters of race.

Over the years, people have reached out to me seeking support, advice and occasionally a signal boost on matters of importance when it comes to race in Maine. Today I am sharing a letter from a University of Southern Maine student who reached out to me this weekend after experiencing a rather jarring experience at the school’s campus. I have never been a student, faculty member or employee of the university but I have known more than a few people of color who have mentioned questionable treatment on the school’s campus. Which is why I am sharing this letter in its entirety at the request of the letter writer. Many in Portland, ME feel that Portland is the progressive hub of the state yet for those of us without white skin privilege we don’t share that view. If we are going to create real change, it’s time to shine some light on the experiences of all Mainers.

My name is Idman Abdul and I am a Canadian International-Student here at University of Southern Maine (USM). I am also a member of the Multi-Cultural Students Association, and a new student senator here as well. As much as I am proud of these positions, it doesn’t really mean much if my institution does nothing to aid its students in ensuring a more progressive and inclusive environment.
Over the past two years at USM, it has become evident that my institution has failed to foster an environment where students of color have felt comfortable, safe and engaged. For example, many students of have attempted to run for student government seats and as a result, they were confronted with racism and xenophobia. USM has failed to address these concerns in the past and continue to do so now.
Yesterday evening, two students decided to wear “Ebola Nurse” costumes to campus. These two students were approached by USM’s Multi-Cultural Student Association members (myself included) and were told, kindly and calmly I may add, that their costumes were insensitive and hurtful. They were told that this didn’t mean they were bad people and that we were coming from a place of love and understanding. 30 minutes after walking away we were approached by the POLICE. The students had told the police that we seemed dangerous and that they felt threatened. The fact that students like these walk around campus triggering students with their hurtful behavior and then can go ahead and call authorities on those they have offended is beyond me. I find myself obligated to shine light on this issue (them calling Police on us, 6 women of color) and all of its ethical, moral and racial implications. As black Muslim students, I find no other reason for them to have believed we meant them any harm other than our obvious physical appearances. We have since provided the authorities with our statements. With the history of occurrences at this school, I know as much as we approach administration for a change, that this will only get swept under the rug or they’ll offer up one of their “trainings” that never seem to do the job. That is why we are trying to get the word out there and show people what is really happening to students of color here. 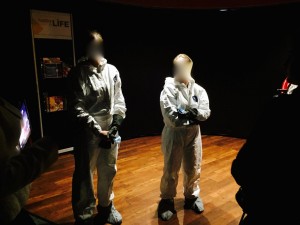 These two students put on costumes that had the potential to cause widespread hysteria across the campus and then proceeded to not only defame us by making a false call to the police but also used State Funds to coddle their own egos. These women are nurses! Anyone in their field particularly, should know better! How desensitized have we become as people that an epidemic killing thousands, could honestly be referred to as a joke? Those people, I’m afraid, are too blinded by their own ignorance to see that they have actually affected us deeply. I will never forget locking eyes with another female in the room, the moment we saw them in their costumes. I will never forget the hundred horrible thoughts that crossed my mind the second I assumed they were CDC officials. And lastly, I will never forget the offense and shame I felt after being approached by an officer who believed me to be anything other than a regular student. A threat is what I, along with 5 others, were called ‘A threat’. After being terrified beyond belief all for the benefit of someone carrying out their own sick, tasteless joke (if we can even call it that).
I have attached a two photos of the women in the “Ebola Nurse” costumes. And here is a link to a post made on tumblr by another student who was there. She included the times and you can talk to her too if you like!
Thank You,
Idman Abdul
Note: I am keeping comments open because I believe dialogue is important but I will not tolerate slurs, insults or attacks.