I don’t know how it happened but my life has suddenly become very busy, for some people, they thrive on busy. Unfortunately I am not one of those people, busy and I are not friends, too much busy is just not good for me. Lately the pace of my professional life combined with the storms of life including finding out this week that I need $9000 worth of dental work (guess my teeth will indeed be optional!) have pretty much knocked me on my ass. So I decided that the entire family would play hooky from school and work on Friday and hit the Common Ground Fair.

Maine is a rural state and fairs are a part of life here as I recently posted but in my decade here I had never been to Common Ground. Common Ground is like the anti-fair type of fair. For starters it’s put on by MOGFA which is the oldest and largest state organic association in the country. So this fair is pretty special. All foods must be organic and ideally made in Maine, bottled water is not sold, and instead there are water stations to refill your water bottles that presumably you brought from home or bought on the way up.

Over the years I had heard a great deal about the Common Ground fair and really wasn’t sure what to expect but I will say it started with a really long car ride. A hair over 3 hours to be exact. Now regular readers know I have a driving phobia, but driving phobias fall in to the family better known as agoraphobia, so 3 hours in a car for me is like hell. Yet a need to get away from the laptop and connections meant I swallowed the long ride a little better than I might have normally done until we almost got lost and ended up on some really winding roads in what appeared to be the middle of nowhere.

I admit it probably sounds funny to hear someone who lives in Maine describing parts of Maine as the middle of nowhere but trust me on this. I live in walking distance of vital necessities like Starbucks and the Amtrak train. Our travels took us to a part of Maine, where I didn’t even see gas stations. Instead the closer we got to the little town where the fair was headed; we passed through a town that looked like it was plucked straight from the 1950’s. Needless to say taking my Black ass out the car to snap a photo was not on my list of must do’s.

However when we finally arrived to the MOGFA grounds and the fair, it was so breathtaking that I knew it was worth the ride. To enter the fair we parked and took a 10 minute walk through the woods. Oh my! As we walked through this almost magical looking forest, I literally felt the tension melt away. Did they sprinkle magic dust on the path? I don’t know but whatever it was, it sure felt good to this weary gal. 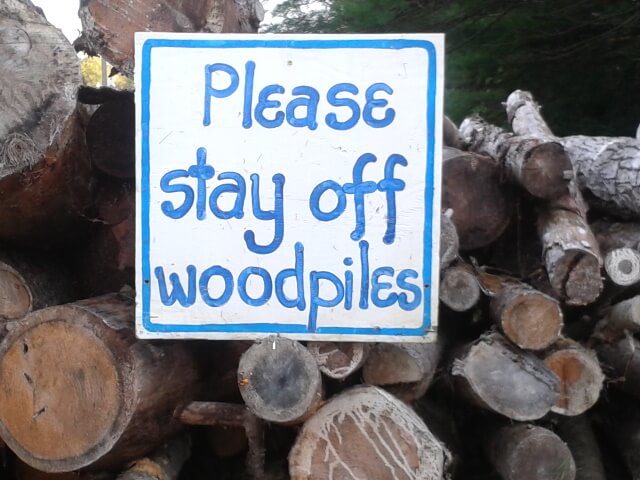 In my decade in Maine, I would say that anytime that I have attended a fair, while I have never “not” had a good time, I am always on my guard since the typical fair brings out its share of people who frankly can be a little rough around the edges. The kind of folks who have no problem being pleasant enough to my family and I, but at the same time I can see them letting a n-bomb drop out of their mouth. At which point it would be on like my bowels after a plate of collard greens, but I digress.

Seriously, the Common Ground fair is like a mixture of enlightened yuppies, hippies, organic farmers and a few of us who have no category. Every white person I saw with dreadlocks hit me with the nod like we were members of the same tribe (I haven’t had dreads in years, but hey I take it in the spirit it was given), people seemed mellow and the again the vibe was chill.

Let’s talk food, oh my! After a rough start with a slice of pizza that most likely had vegan cheese and a crust that was just wrong on every level and a maple donut that really could have used some sugar (sugar isn’t made in Maine) we finally got our food choices right. Let’s see, we ate a little of everything and if it wasn’t for that 3 hour drive back home, we might have eaten more. Most interesting thing we discovered was a cheesecake cone thing, take a cheesecake and put it in a waffle cone. It was tasty but a tad too rich for me. Only beef I had about the food was that it was costly, granted I know why but the next time we attend I will make my budget for the fair a tad higher.  The only item I really felt was over the top price wise was coffee, $3 for 12 ounces of coffee with no lid on a cool fall day is insane. I don’t care what you say.

On the other side of food is the farmers market, again had we not had a 3 hour journey back home and a budget I would have went wild, but sadly my budget constrained me. So all I did buy was some maple sugar that I am dying to try on my oatmeal soon and a bottle of elderberry syrup and a watermelon. (Yep, watermelon grows in Maine)

From an activity standpoint, we barely touched the surface instead spending most of our time in the kid’s area, since with a community mural wall; make your own prayer flags and a host of other activities the 7 year old was in hog heaven. I did though escape and do a walk around and peeped some blacksmithing and a few cool discussions. I even had a chance to see a blogger whose work I have followed up close for years as  Soule Mama was present and representing her publication Taproot. Amanda looked to be in the knitting zone and talking her up just didn’t feel right, I mean I can only imagine how many other 30 something year old Mamas probably talk to her. Instead I bought my copy of Taproot, made small talk for a minute with Taproot’s publisher, scored a pencil for the 7 year old and went about my business.

Anyway, a day away in nature was just what the doctor ordered, life is still pouring buckets on my head, but I forgot how good it can be to play hooky from life though my 7 year old was a tad concerned that we were breaking the rules. Rules are meant to be broken, sometimes life is meant to be lived. So yeah, if you have heard about the Common Ground fair and wondered if it was worth all the hub-bub, let me say yes, it is. A fair that is light on consumption and heavy on celebrating is worth the hub bub.

P.S: My other food complaint was that there was no soda, can I just say the amazing fries would have been even better with an ice cold Coke instead of the sugarless limeaid I had…yeah, I know.

P.S.S I wasn’t even the only Black Girl at the fair, guess Maine is diversifying.

4 thoughts on “BGIM does Common Ground…the fair that is”