Growing up in Chicago working class in a good year and downright poor in a bad year, it never dawned on me that regular people lived on islands. Typically, when one thinks of an island, images of warm, tropical spaces and fruity drinks come to mind. Then I moved to Maine, where I would learn there were hundreds of barrier islands, many uninhabitable (or at least uninhabited) but more than a few that were places where real people lived.

Early in my Maine journey, I would meet a woman who actually lived on one of Maine’s barrier islands and throughout my graduate school journey, I would take just enough rides on the ferry to meet with this woman (who became my grad school adviser) to become completely smitten with the idea of living on an island. Of course, I would settle down in a sleepy, near-coastal hamlet in a house about five miles away from the ocean, yet that burning desire to live on an island and be enmeshed with the sea would never fully go away.

Which is why many months ago, when it was clear that the marriage dance was winding down, I reached out to an island-living friend asking her to keep an eye out for a reasonable rental. Never in my wildest dreams did I think that I would secure a year-round island rental on one of the more popular (with tourists and residents) islands, nor that it would be at a price that I could afford on my salary. Yet sometimes our dreams do come true, even in the midst of the most uncomfortable of times.

In recent weeks, I have fielded many inquiries around my decision to move to an island from people who keep worrying I’ll feel too isolated (ironic, considering how socially isolated I’ve been for 12 years in a mainland town) to my poor family back in Chicago, whom I don’t think quite know what to make of my move…but I suspect they will make peace with it soon enough.

As for me, the closer I am to the sea, the more at peace I am. The older I get, nature feeds my soul but water specifically is what nourishes and recharges me, perhaps it is my Aquarian nature.

Life transitions are never easy, not even when they have been well-planned, and yet it’s a time for a course correction. To tweak one’s life, to search for the life that feels right and not merely like a pair of ill-fitting hand-me-downs that are worn when there are no other choices.

I can’t lie: With an office in downtown Boston and a kid who splits her time between the island and the sleepy hamlet where her dad lives, some days I don’t know whether I am coming or going. My life is coordinated on four different calendars so that my staff, my co-parent and I know where I am supposed to be on any given day. Yet the joy of being in my tiny little space is worth it, and my travel schedule most certainly keeps away any of the isolation that can be part of island living. I think the larger issue for me in managing what increasingly feels like rebuilding my life is accepting the loss of connections…the friends who suddenly treat the marital break as if it were a contagious disease. The empty promises of support made on Facebook that never materialize when you reach out. The questions that border on “none of your fucking business” or the assumptions that are made. The snide comments about me made to my co-parent, which people assume I will never know of because of their assumptions that we couldn’t possibly still be amicable (and, indeed, very close friends still). The wondering if it’s even possible anymore to connect on a deeper level with people in the era of social media connections.

However, through it all, there is the sigh of relief that the tensions that were part of our family’s daily life for so long are dissolving. The muscle pain that I have lived with is lessening as it dawns on me that the many healthcare professional I have seen in the past year may have actually been telling the truth about stress causing my muscles to essentially lock up. The relief at being our real selves and yet still being a family.

In the meantime, I am settling in and allowing myself to go with the flow as I start over and rebuild. The longer I live, it’s clear that sometimes we will have to hit the restart button more than once.
————————————————————————
Black Girl in Maine runs on passion, a need to write, and reader support. If you enjoy the musings, I would be honored if you would please consider making a one-time contribution or becoming a monthly patron. Thank you. 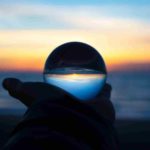