There are people who come into your lives whose presence changes the entire trajectory of your life; for me personally there have been three such people, two of whom I married and the other who was my first instructor when I went to college in my mid-20s. As I have recounted over the years, I was not a stellar student in my high school years (partially a lack of dedication to class attendance and homework but mostly an inability to pass gym classes). So much so that at the beginning of my senior year of high school, I simply decided not to return, instead running off a few months after turning 18 and getting married and then becoming a mother a few weeks after turning 19. Statistically, my life should have been a wrap given that my decision-making at that stage in life wasn’t great but sometimes the universe has a plan that you can’t even begin to imagine.

My early adulthood journey would take many twists and turns and at 25, I would find myself enrolled the School for New Learning at Chicago’s DePaul University (a program aimed at older and other non-traditional students) where my first class was “Women in the Black Church,” taught by gregarious and warm, middle-aged Black woman with a deep laugh, a sparkle in her eye and a slow and measured way of speaking. Cynthia Milsap spoke with authority, but she was warm and inviting and in that first night of class, she asked us to share about ourselves and, in my self-deprecating manner, I said something to the effect that I probably wouldn’t be in this class too long because I wasn’t known for being too book-smart. Cynthia looked at me quietly and told me that “That was not going to happen” and that she would be with me on graduation day. 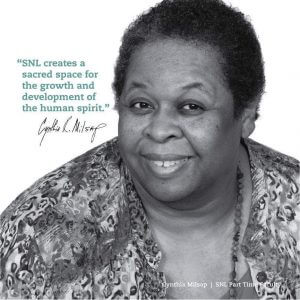 What can I say? If I had been a betting woman, I would have lost that bet because Cynthia was correct. Over the  years Cynthia would become not only an instructor but my adviser, my mentor and a dear friend. Cynthia saw me not only getting through my undergraduate years but excelling in a way that I could not have imagined. I completed my undergraduate degree in three years, working full time while mothering and being a wife.

During my last months as an undergraduate, Cynthia saw my passion for African-American studies blossom and strongly suggested that I consider applying to graduate school. I did and much to my own surprise, I was accepted to every program that I applied to, even ones that were extremely competitive.

From that point on, Cynthia would serve as my unofficial mentor over the years. When I relocated to Maine, Cynthia stayed in touch with me through the years and every major transition of my life since my late 20s. If too long went without contact, it was not uncommon to get a call (or several) reminding me that with faith all things are possible. Cynthia’s love and support has nurtured and nourished me over the years and she saw in me (and many others) infinite, unlimited potential when no one else did. Much of what I am right now is directly because of Cynthia’s unwavering belief in supporting Black women and all marginalized people. Cynthia was not merely an adjunct professor, she was a minister with a deep abiding faith. She also spent many years serving as executive director for a Chicago faith-based nonprofit, The Night Ministry, and over the years was a researcher and consultant who wore many hats and worked tirelessly for change.

Hence my surprise several weeks ago when I heard that she has been ill since late June and receiving care at Chicago’s free hospital since that time. Turned out that Cynthia had no health insurance and furthermore was at risk of losing her place since with her hospitalization, she hadn’t been able to work and her landlord was getting ready to start eviction proceedings. Several friends put together a crowdfunding campaign to stave off the eviction.

It shook me to my core that a woman who had given so much of herself over the years would be in this situation but it is the unspoken reality that affects far too many Black and Brown women who nurture and nourish others in a world where economics don’t favor women like us. It’s the unspoken reality that pushes me because I saw both my own mother and grandmother die with little in the way of material comforts.

Unfortunately my beloved mentor, Cynthia Milsap passed away this weekend after receiving a diagnosis of kidney disease and systemic lupus.

There are no words. There are only tears because, as I have learned with the other women whose shoulders I stand on, our time on this rock is limited and yet we carry the essence of our personal change-makers with us wherever we go, hoping that we can be half as good as they were.

There was only one Cynthia Milsap but in countless communities there are Black and Brown women like Cynthia whose unwavering faith and belief in nurturing the human spirit plants seeds that sprout in untold places. Women who give so much of themselves, sometimes to the exclusion of themselves, and we (like that greedy boy in Shel Silverstein’s dark story “The Giving Tree”) rarely think about how we can give back.

Rest well my dear friend, big sister and mentor. This is only goodbye for now, until we meet on the other side.
————————————————————
If this piece or this blog resonates with you, please consider a one-time “tip” or become a monthly “patron”…this space runs on love and reader support. Want more BGIM? Consider booking me to speak with your group or organization.