The most dangerous White supremacists wear suits and smiles, not hoods. They kill with respectable debate and marching orders, not weapons. – Ju-Hyun Park 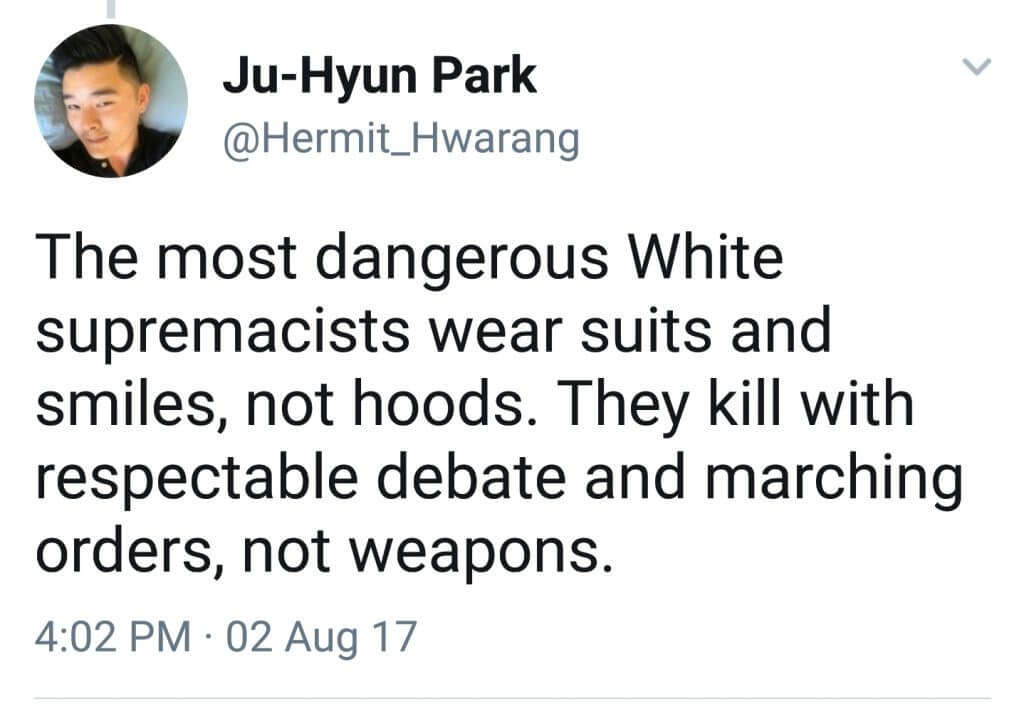 I am a Black woman from Chicago living in Maine who writes and talks about race pretty regularly. Then, to ensure that I really never stop talking about racism, my day job is heading up an anti-racism organization. That means that my small-talk game in social settings leads to some pretty interesting moments. If you want to kill the vibe at the local watering hole or social gathering, try talking about a job like mine in the era of Trump. I am what some might consider a buzzkill. Hey, it’s a living and someone has to do it.

Seriously though, what happens far too often is that some white person, upon hearing what I do for a living, wants to engage me on race and generally starts feeding me the “I don’t see race line”…“We are all the same”…or some other line of deflection that reveals that the speaker has never thought deeply or critically about race. Someone who rarely or never understands that to be white in America (and, frankly, most of the world) is to exist in a bubble of privilege.

As I said in my TEDx talk last fall, America is a nation built on stolen land that was built with the bodies of stolen and enslaved people. In choosing that course of action, we set in place a country where possession of white skin has meant inclusion into the family of humanity and anything less than white skin has meant a struggle to be viewed as fully human.

What’s interesting is that since the Obama presidency, there has been a shift in perception that white folks are becoming a minority and that anti-white bias/discrimination is an issue. Funny how the first non-white president out of the previous 43 white male presidents brought about this shift in mindset. I guess when you don’t see yourselves occupying the highest seat in the land, it causes one to feel some kind of way.

Well, fast-forward past the Obama years to the Trump months and we have Trump to the rescue, making America great again by putting those Blacks and other non-white, non-cisgendered, non-heterosexual, non-Christians back in their place. Under the thumb of the straight white man.

Given how fast things move in Trumpland (in the span of a Scaramucci perhaps, or maybe a Scaramouche?), I have tried to avoid writing about Trump directly because by the time I pen my thoughts and post, we will be on to the next calamity or stunt. However as news broke that the Trump regime planned to investigate anti-white bias in affirmative action admissions policies, I had to say something.

For decades now, there has been this fixed false belief that Black people and other minorities and immigrants were getting all the goodies once reserved for white people and thus displacing white folks from their “proper” place of entitlement. When you are used to having all the candy in the treat bowl, sharing does feel uncomfortable but that is how we achieve racial equity.

The real deal is that white folks and specifically white women are the biggest beneficiaries of affirmative action. Let’s go back several decades and talk about how the great middle class in America was created. After World War II, soldiers came home and took advantage of the GI Bill, the reward for serving your country and coming home alive.

The GI bill allowed soldiers to come home and to have access to housing loans and education, as my friend and colleague Debby Irving writes about in her pivotal book Waking Up White. Debby talks about how her parent’s first home was subsidized by the government and her father was able to attend law school for free. Debby’s family was not alone. Millions of white folks had access to the American Dream and the GI Bill was the great equalizer. At the same time that white GI’s were starting to climb the ladder of the American Dream, Black GI’s were blocked thanks to the racial inequity embedded in the higher education, finance and housing systems. In the end, only 4 percent of Black GI’s were able to access the bill’s offer of free education.

Why does this matter in 2017? Well today’s white folks are the direct beneficiaries of those GI’s in the 1940s and 1950s. That means if your folks were able to get an education, buy a home and start building wealth, chances are high that you were raised with real access to the tools for upward mobility. Our homes are our largest biggest wealth builders and where you live matters even more given how we fund schools and other resources. All schools are not created equal.

Back on the other side, the FHA created a set of policies that would come to be known as redlining that essentially pushed Blacks into less favorable homes and neighborhoods. These policies had a trickle-down effect and Black folks were often relegated to communities with declining home values thus little chance to build equity and create wealth while their white counterparts were creating wealth in their homes. Moving to a better neighborhood wasn’t exactly an option since the better areas were associated with whiteness and Black folks were essentially blocked from accessing those areas thanks to the federal government. And when Black people have moved into such neighborhoods, white people have often moved out (no matter how professional or wonderful those Black people) and those neighborhoods were seen as less desirable and home values went down.

I am not about to give a full history lesson here but if any of this is news to you, a great place to learn more is watching PBS’s Race: The Power of an Illusion.

The same white folks who ballyhoo about non-white people getting great stuff for free or getting more benefits (both of which are very, very rarely the case) are often the same folks who refuse to see all what whiteness has bequeathed to white folks. To go even further, they often refuse to see whiteness at all. To be white for many white folks is to be “normal.” Thus, everything that white folks do is the norm or the “proper” way and everyone else is “other” or “wrong.”

So, when a country starts to racially and ethnically shift, it feels like a seismic shift of epic proportions to white people, even if it really isn’t. The thing is that even with the very real racial and ethnic shifts happening in America, that won’t necessarily change the power dynamics. And, ultimately, it is those dynamics that must shift for true equity and equal opportunity. After all, majority-minority locales (places where whites are the minority, that is) where almost all the power and wealth still resides with white people are not an aberration; it’s typically the rule.

There is a certain irony that the Trump cabinet is overwhelmingly filled with rich, white people and yet it feels the need to take on this almost entirely mythical anti-white bias. Truth is that this is nothing more than a wink and a nod at Trump’s base of disaffected white folks who have been left behind in a changing world. The problem is that it will do little at all to help his base (because they have been left behind by factors other than racial shifts) but it has the potential to create a world of hurt for Black, Brown and other non-white people who are participating in an unfair race that is tilted towards white success.

The only way we will move past this is to start having honest discussions on whiteness, but I suspect that conversation will not be held by the current regime.
————————————————————
If this piece or this blog resonates with you, please consider a one-time “tip” or become a monthly “patron”…this space runs on love and reader support. Want more BGIM? Consider booking me to speak with your group or organization.