Yesterday, a Maine-based reader informed me that a friend had woken up to a flyer from the KKK in her driveway and was aghast. I can’t say that I would blame her; if I found a flyer from the KKK in my alley, I too would be pretty damn bothered.  Between the time I received the notification and now as I write this, the story has made its way into the local news cycle. What is interesting is that the local news reports are reporting this as an isolated incident where my own sources are saying that others have informally come forward to say that they also received these flyers. But apparently it seems only one person went to the authorities. 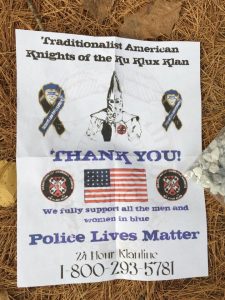 Today’s Portland Press Herald states that local authorities have investigated the matter and  “found no cause for alarm or concern that a crime has or will be committed,” the sheriff’s office said in a news release Sunday.

Well there ya have it kids! No cause for concern, no crime committed, keep it moving, there is nothing to see here. This incident highlights on many levels how we avoid dealing with the uncomfortable moments of life and pretty much allow bigotry a safe haven to grow, out in the wide open.

Given that we are sitting on the eve of what is most certainly a presidential election the likes of which none of us have ever seen, where hate and hostility have at times taken center stage, it seems now would be a very good time to reflect on how we reached this point. This moment in time didn’t just happen. It did not occur in a vacuum. We all played a role in getting here. We have all been complicit in creating the spaces where people with poisonous hearts have been able to thrive and find like-minded people to connect and grow ugly with.

We so wanted to reach that post-racial state of America, without doing the heavy lifting, that we allowed ourselves to believe that Obama’s election in America signaled a new day when in fact it put us on a collision course for this moment. While many of us were busy feeling good and drinking the hope juice, the disgruntled deplorables were busy retrenching and planning their next steps. In the end, they have pinned their hopes on a man so dangerous and undisciplined that he isn’t even allowed to manage his own Twitter account without veering off script, yet millions see him as their hope and savior.

Every time we are not intentional in our words and actions, we give hate a place to grow. When we choose to brush off the bigoted comments of others in our world, we allow hate to firmly plant its roots. When we cannot look critically and clearly, instead holding to immature and uninformed “hopes” because of personal discomfort, hate wins again.

The process of creating a just and equitable world requires full participation. It cannot be pinned on the hopes of our politicians, activists and others. It starts with us. Many of our own journeys with change may not be as dramatic as being called to full-time service or activism, but we can all hold space wherever we are, even if that means going to the police and calling out hate despite the lack of an official crime.

Whoever distributed the KKK flyers technically didn’t break any laws, yet given the history of the KKK in both Maine and nationally, it would be a fool’s errand to not understand that hate is feeling safe again. It feels safe enough to leave flyers in driveways because most of us won’t do anything about it. Many may not call the number; too many of us also won’t take a stand and say NO loudly in any other ways.

Regardless of who wins the presidential election, we all have a lot of work to do because what Trump unleashed is not going to quietly go away if Trump loses. Will you take a stand for what’s right or will you look the other way? Will you be intentional or will you avert your gaze and withhold your voice until it’s too late and hate threatens us all and perhaps turns into a nigh-unstoppable force?
—————————————————————–
If this piece or this blog resonates with you, please consider a one-time “tip” or become a monthly “patron”…this space runs on love and reader support. Want more BGIM? Consider booking me to speak with your group or organization.