In recent days, I wrote about the Dakota Access Pipeline and the mistreatment and disrespect shown to Native Americans protesting that pipeline. It was a post that had a bit of anger and grimness to it, which isn’t surprising given how infuriating and demoralizing the situation is as it has grown ever more militaristic against those of Native American/American Indian ancestry.

But it also reminded me, as I wrote about things like the economic struggles on many reservations and the oppression that Native American people experience from the government and from many Americans in general, that people aren’t simply the sum of their sufferings.

Too often, Donald Trump has talked about how “hellish” life is for Black people, describing desperate hardscrabble lives that don’t represent much of Black America. Most Black Americans are law-abiding citizens. Quite a number of them have livable and even middle class and higher incomes (even if they are typically lower than those of comparably experiences white people). Education at the college level is increasingly common. But still, Trump equates Black Americans with the “inner city” and with “poverty.” He doesn’t really acknowledge the state-sponsored oppression Blacks toil under nor the frequent racism they experience from many Americans, and yet at the same time he focuses on them as suffering, desperate people.

Makes one wonder where he thinks their pain comes from.

So, I don’t want to leave the impression from my post on the pipeline protest that Native American people are just one mass of people either suffering from poverty or being oppressed on a regular basis. Like Black people, they are whole people, not mere victims. They are active, they are vibrant and they are worthy of respect.

So, I thought I’d share some news that passed my way about a push to highlight Native Americans in the STEM arena. I’ll let the late-August news release from the American Indian Science and Engineering Society speak for itself, though:

The Natives in STEM project—Changing the Face of Science, Technology, Engineering, & Mathematics

Albuquerque, NM (August 31, 2016)—Today, a new project, Natives in STEM, unveiled a unique resource to encourage Native American youth to participate in Science, Technology, Engineering, and Mathematics (STEM). New posters featuring Native STEM professionals will be distributed to schools and communities across New Mexico and the U.S. A complementary website (www.NativesInSTEM.org) filled with Native STEM professionals’ stories has also launched for students, schools, and communities to use as an educational resource.

“Growing up, I didn’t see anyone who looked like me, didn’t see myself represented, in my science and math textbooks and classroom walls,” said Chelsea Chee, project co-founder and Diversity Coordinator for the New Mexico Experimental Program to Stimulate Competitive Research (NM EPSCoR), a National Science Foundation-funded program. “I wanted to change that.”

Studies show that students find it difficult to imagine themselves as part of the STEM community if they don’t see people like them represented in related images or learning environments. However, exposure to positive images and success stories can increase a sense of belonging for those not traditionally represented in STEM fields. Images and stories of Native scientists, technologists, engineers, and mathematicians hardly existed for Native people to access, until now!

The first Natives in STEM posters feature two Ph.D. engineers—Stan Atcitty, a Dine’/Navajo man at Sandia National Laboratories and Otakuye Conroy-Ben, an Olgala Lakota woman and professor at Arizona State University. And, www.NativesInSTEM.org has stories from other Native professionals from different tribes and backgrounds. New posters and stories will periodically be added in the future. 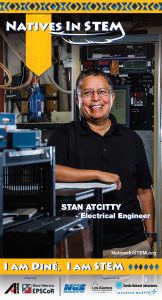 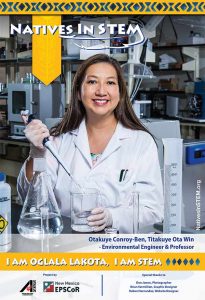 “We are excited see a school on a tribal nation with a poster of a Native engineer hanging on the walls for all the students, parents, grandparents, and community to see,” said Lisa Paz, project co-founder and Director of Membership and Communications for the American Indian Science and Engineering Society (AISES).

About Natives in STEM: Natives in STEM is a joint project of the American Indian Science & Engineering Society (AISES) and New Mexico Experimental Program to Stimulate Competitive Research (NM EPSCoR).
—————————————————————–
If this piece or this blog resonates with you, please consider a one-time “tip” or become a monthly “patron”…this space runs on love and reader support. Want more BGIM? Consider booking me to speak with your group or organization.