So McDonald’s, the king of cheap, calorie laden, gas inducing (even poop inducing) burgers is going to make the Happy Meal a little less happy and a little more healthy and somehow this is going to help make the children of America a little less obese? Really? Well it seems there are many who feel this is an important step in fighting the war on childhood obesity that is currently being waged by our gorgeous First Lady of the United States, Michelle Obama.

I will admit that we do have a growing issue with obesity in this country but I am not so sure I want to lay it all on the feet of folks like McDonald’s and sugary breakfast cereals as many would like to do. Nope. Let’s take a look at lifestyles, back when I was a kid, I walked to school yet in the age of paranoia kids just don’t walk like they used to. In fact in many parts of the country as Physical Education has been gutted in school districts and to be honest movement only happens in extracurricular activities outside of schools that often have fees attached to them.

Which brings me to what I feel is the culprit behind growing obesity rates in this country, sheer economics, plain and simple. Wages have been stagnant in this country for a while; in fact most so called economic growth seen in families in the past several decades was only because households went from one wage earner to two. Then the credit and economic crisis hit and the jig was up. Yet when households started having two wage earners, which meant no one was home to cook a balanced home cooked meal; well you eat quickly made foods. Quick made does not necessarily mean fast food but it often does mean processed foods which often times are simply not as healthy as can be. Add in a couple of tired parents living in suburbia where sidewalks don’t exist, a big gaming system and you have a stew brewing that will lead to obesity and this is for so-called middle class folks

Take a walk with me to poverty row and it gets even worse. If you are income eligible your kid can get two meals a day for free at school and during summer at schools and community programs. To a family on the financial edge these free meals can seem like a blessing so you don’t have to decide between the light bill and the grocery bill. The question is have you seen a school lunch? If not take a look. 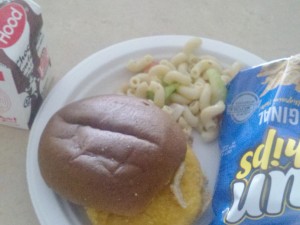 Nothing on that plate screams healthy yet this is what is served to our kids in the US under the guise of healthy and nutritious and before you get mad at the schools. The reality is the United States Department of Agriculture’s meal reimbursement rate to actual providers of these meals is paltry. In the summer the reimbursement rate for lunch is $3.15 per meal per kid and before you get excited, that reimbursement rate covers staff salaries, supplies and all that jazz so really it’s about a buck or so per kid if you are lucky. Millions of kids in this country get the bulk of their daily sustenance under these programs…think about that.

Now let’s think about the fact that over 15 million kids in America are living in poverty, in fact childhood poverty is at the highest it’s been in over 40 years! Couple that with rapid growth in the use of SNAP benefits aka food stamps and maybe McDonald’s is not the culprit, maybe ole Ronald is the scapegoat when the fact is we as a nation are just not terribly vested in our young no matter what we say. The hard reality is people are working harder for less financially, yes there are some parents who need nutrition education but in a society that does not value it’s families in general to focus on childhood obesity without looking at all the other systems that can impact obesity is simply a Band-Aid approach designed to make us feel good but not affect change on any deep level

So to Michelle, I say work on making sure healthy nutritious food is financially available to all, make sure kids have access and the means to physical activity and you can start by making sure their parents are healthy.