The last conversation that I would have with my mother was one that would change my life forever. The lung cancer that my mother had been battling had taken a turn for the worst and the cancer had spread to her brain. Without  surgery to remove the fast-growing tumor, we were told that she would be dead in a matter of days. Our last conversation was the night before that surgery and after days of confusion and lethargy, my mother miraculously came back to me one last time. She made my favorite dish of chicken stew and we sat and talked for hours about life, the future, her hopes and her fears. My mother wasn’t  given to the mystic world that my father lived in but she proclaimed several times that night that I would have another child and that she would be a daughter. Having had my first child at 19, I was ambivalent at best on the matter of additional kids but I humored my mother that night and didn’t think much of it; after all, her survival was the most pressing matter to me at that time.

My mother survived the grueling surgery the next day, but she would never return to us as the woman she had been before and, worse than that, she passed away eight weeks after the brain surgery. Our family was shattered but her words were the seeds germinating in my being. Less than six months after her death, the urge to settle down would become so overwhelming that we would find ourselves as the dazed owners of a 19th-century Victorian home that was in need of extensive repairs. However, before we could get serious about the home remodeling project, less than a week after Thanksgiving 2004, I would learn that what I thought was a mild case of  food poisoning was actually a new life growing inside of me.

In the span of 11 months, I lost my beloved mother, became a homeowner and was going to become a parent again. 2004 didn’t follow my plans at all. Then again, this life thing rarely listens to our demands.

It was a joyous pregnancy though tinged with deep grief. Several times throughout the pregnancy, we didn’t think that our child would make it through to term. My daughter gave us a few scares and even in utero it was clear that she was a magical trickster of sorts, avoiding stethoscopes and other methods to monitor and find her. The day that we discovered that the baby was a girl, I cried like never before, clutching my mother’s engagement ring as the technician gave us the news. It felt as if my mother’s spirit was in the room with us. The girl who had been foretold.

As the pregnancy drew to a close, the name issue weighed heavily on my mind, I have never believed in bestowing a name upon someone without looking at them. I knew though that my daughter would carry two middle names, the first names of both her maternal and paternal grandmothers, both of whom had passed away before her birth. However, her first name wouldn’t be determined until she arrived, though we had a short list of potential names (all that had significant meaning to me). I have always believed that names are important; what we choose to call someone matters and having a name that has connections to something of importance is something I take seriously.

Three days after my daughter’s birth, we named her…her name is Isis. Isis was an Egyptian goddess and represents the divine feminine, motherhood, magic and protection. For a newly motherless daughter and mother, the energy of Isis was what surrounded me and my daughter came to us as a magical imp who in the past decade has retained that spirit of magic. She is her name. But now the United States government says that name is a problem and I am not happy. Hence, as I tend to do in these moments, I write.

When my daughter was born in the summer of 2005, there was no jihadist militant group named the Islamic State of Iraq and Syria or ISIS as the majority of Americans refer to the group. Isis was to most Americans was an obscure Pagan Goddess and few carried that name. The biggest news around the time of my daughter’s birth was the horrendous hurricane named Katrina. While the memory of September 11, 2001 was still fresh in the minds of many and talk of terrorism had yet to die, most Americans had settled into a cautious sense that all was getting better.

Fast forward a decade later and terror is a staple in our culture, while the Islamic State is a problem, most Americans should probably fear the asshole in the car next to them who is trying to Facebook and drive rather than an invisible and lawless force that in many ways is amorphous. However, in light of recent events abroad and within our border, the safety of Americans has been made a top priority over many other more pressing matters, and hatemongers and hucksters have us all grappling to feel safe in a world gone mad.

However tonight the war on terror got personal. My son wanted to get his sister, my daughter, a meaningful Christmas gift. His career is taking off and he’s finally in that adult space where he can afford to gift his sister with a meaningful gift. My daughter who loves to draw has been dying for illustration classes and I mentioned it in passing to my son. My son offered to pay for her class. A win-win for both of us. My son who is home visiting decided to PayPal me the money so that I could get her registered in the class and present the registration to her on Christmas morning. Minutes after he PayPaled the money he received a notification that the payment was pending, as did I. Now we both use PayPal frequently and have verified accounts; neither one of us had seen this type of message before especially since he sent the money from his PayPal funds. Upon further inspection I saw a curious notation “To comply with government regulations, PayPal is required to review certain transactions. This payment is currently being reviewed and we will complete this process within 72 hours.”

What did that mean? We were both stumped until my son realized that in the notes section, he had put for “For Isis’ gift”….oh shit!! After a few minutes of going around, I told my son that he needed to call PayPal and explain that Isis is his sister not a terrorist group, as it became clear to me that the transaction was being frozen because he had written his sister’s name which now has the most unfortunate of associations at a time when far too many Americans are scared shitless. After much talking with two different PayPal representatives and offering to send the birth certificates of both my son and daughter, we were told that PayPal couldn’t do that because the file had to be reviewed by the government to ensure that no terrorist activity was going on. The last representative was sympathetic and said yes my daughter’s name had triggered this action. 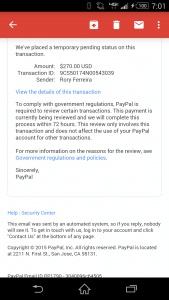 As of right now, we are waiting for the review to be completed and have been informed that there is a strong chance that the transaction won’t be allowed to go  through but once that happens all my son has to do is to resubmit the payment but not put his sister’s name on the transaction.

Look, I know we all want to be safe, I get that. But I am sorry: we are looking under the wrong rock here. Especially as there have been recent incidents of women and girls named Isis being harassed (and businesses named after the goddess vandalized). Isis is an ancient name that predates both the United States and the Islamic State of Iraq and Syria (or Islamic State or IS or ISIL…or Daesh if you want to insult them a bit…call them anything but ISIS). The fact that the media created the convenient acronym with no regard for the fact that there are little girls and grown women who carry that name (nor respect for an ancient culture and religion) is not acceptable. My daughter has already had to endure snide comments from her peers who hear disparaging things about the Islamic State and associate it with her name. No child should have to explain that they weren’t named for terrorists.

I know that in choosing to go public with this story, I will invite the ire and less-than-pleasant comments but the idea of my beautiful little girl being ashamed of her gorgeous name is not acceptable to me especially because in the age of Google, there is no reason for the jihadists to be referred to as ISIS when there are other names that are more fitting available (as I noted above).

Names hold power and what we choose to name someone or a group matters. When we carelessly slap a name on a person or a group, we never know the damage that we can do. Nevermind that if the security measures we as a nation are using  to keep Americans safe involve making sure a little girl’s Christmas gift is delayed when her name can be proved. Yet we miss the chatter about the really dangerous killers that do inflict harm daily in our country who aren’t racist. I am sorry but we just might all be screwed!  My daughter shouldn’t have to pay the price for American ignorance and overblown fears, though.
________________________________________________________
Black Girl in Maine runs on love and reader-support, if you enjoy this space, please consider a one time gift or becoming a monthly patron. Thank you!!