Prior to last year, this little space had a very small readership and was virtually unknown but then I appeared on “that” list of Mom bloggers and bam! Suddenly my inbox was filled with all sorts of offers to review items and promote products and programs. Initially it was pretty exciting but after receiving items that I wouldn’t suggest to my worst enemy, I quickly realized that just because someone is offering something free is no reason to actually accept it. Then there was the rather practical issue of time, juggling a pretty intense job and family means I need to be pretty selective about what I actually choose to promote because time is money and freebies don’t pay the bills.

That said, a few weeks ago, I received an offer that I couldn’t refuse especially since saving money is the name of my game these days. My seven year old is the holiday queen, she loves em all but Halloween is her high holy day. First, there is all that candy. Candy that mommy and daddy will eventually steal and that she won’t ever eat and then there is the costume. Seven loves to dress up, she is all about the costume, actually she loves to dress up all the time, but Halloween means she can dress up and go outside.

So in BGIM land, planning of the ensemble starts early and this year was no exception, until I told her she could pick out a costume that wasn’t mom and dad made as long as she would give me her opinion on it. It was a deal that she couldn’t refuse. After spending way too much time looking through HalloweenCostumes.com vast supply of costumes, we agreed on the Spiderina Witch costume, which you can view here.

So we placed our order and a few days ago the very nice Spiderina Witch costume arrived and Seven nearly broke her neck trying to open the package…here she is. 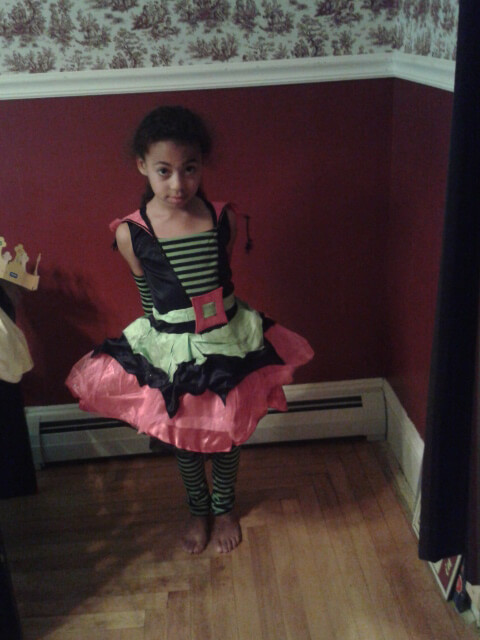 Seven liked it, her exact words “This is way cool” spoken in her valley girl voice.  We are adding a few homemade accoutrements and if the Frankenstorm that is predicted for the east coast doesn’t ruin Halloween, I think Seven is going to have a fabulous time in her first non-Mommy & Daddy made costume.

Seriously, this is a good site for costumes, wide array to choose from, so 2 thumbs up from BGIM and Seven.

The FTC says I must tell you that I did receive a complimentary item, but as always, my views are my own and longtime readers know I keep it 100% real.