Over the years as this blog has grown from being a space where I share personal thoughts and reflections on life, race and current events with a limited readership to a space publicly linked to my professional life, I have intentionally limited what I share about my personal life. However there are times when the issues that I am facing in my personal life feel universal and I think that they are worth sharing despite knowing that sharing is sometimes uncomfortable.

In a few short days, I will celebrate another year of life and while this past year threw a lot at me, it was also a year of making peace with myself.  In a strange way the growing angst of my thirties was put in place by the selfie of all things.

Since my early 30s, I have had a tumultuous relationship with my physical self, to be blunt; I didn’t care for how I looked. It was in my 30s where after a lifetime of being at a stable weight that I put on a significant amount of weight. The whys are unimportant though a good deal of it did come from medical issues that have since been resolved. In the past I have written about my journey with Weight Watchers, where after several years I took off all the weight and in the past couple of years have put some of it back on.

However the closer I moved to 40, the more I found myself really not feeling comfortable in my own skin, so much so that there are few pictures of me in the family scrapbook. I realized that sometime ago and as someone who only has a handful of pictures of family members who are now deceased, it pains me greatly. I cherish the few pictures that I do have of my mother and wish that there were more pictures of her to share with my own kids.

One of the reasons that I stopped allowing pictures to be taken of myself in my 30s was because frankly 99% of the pictures that were taken of me were not flattering at all. Granted I know my loved ones would not care but I cared and as a result when I was not feeling good about my physical being, the last thing I wanted was unflattering pictures to document it.

Enter the selfie, I suspect that anyone reading this space is familiar with what a selfie is and while much has been written about the narcissistic nature of the selfie, I beg to differ.  Selfies may have started off as a way for teens and young adults to pass the time but as the world recently saw, even the president of the United States has been known to take a selfie.

While there are many who still shake their head over the idea of adults taking pictures of themselves and sharing them with others, I can say that for this middle aged woman, taking pictures of myself allowed me to actually see myself in a light that I am comfortable with having documented for myself, my family and the world at large.

In a culture that worships thinness, youth, and whiteness, in taking control of my own image as an aging, not so thin, Black woman I am making peace with myself as I am but also showing others that I exist and that it is okay to be who you are. Much of the internal work that I have done in recent years has brought me to this point where I can once again be comfortable in my own skin and let the world know it. In that spirit I am taking part in the #365feministselfie project  where once a day (or every few days) I take a picture of myself and share it on Instagram. While outside attention and validation are nice, that isn’t the point for me, I am claiming my space on this dusty rock and publicly making peace with my physical self. 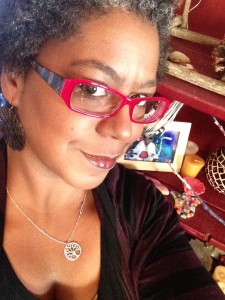 So I am boldly entering my 41st year of life on rocky terrain but it’s a little less rocky than it was just a few short years ago.  And maybe that’s because I can picture my personal terrain a bit better with the selfie.