In case anyone missed the name of this blog, I live in Maine, yes; I really do live in Maine. I am not a native Mainer, no; I landed here 10 years ago as a result of losing the stalemate with the former Mr. BGIM (granted he would technically be the former Mr. BGIC but I digress) and needing to be in the same state to make joint custody of our son work. To say I didn’t really want to be here would be a bit of an understatement. Needless to say, I moved to Maine and figured as soon as the kiddo hit 18, I would be out quicker than you could say Maine.

Obviously Maine grew on me, but the one area where Maine has continued to disappoint is food specifically access to Latin American food. Now one might wonder but aren’t you Black? I am but I am also splashed with Mexican as I like to call it. My Mom spent the first 7 years of her life raised by her Dad and her Mexican Grammy and as a result, for me growing up, our house was a mixture of American soul food and Mexican food and I don’t just mean tacos. I do know how to cook some dishes but living in Chicago for the first 29 years of my life, I had ample access to foods that truly fed my soul. In Maine though it’s been hit or miss with a lot more misses than hits!

The first few years in Maine, all I had was pseudo Tex-Mex style places and one lone Salvadorian joint that definitely fed my soul but still I needed more. In the last year though as Maine as gotten a little browner, my options for Latin American cuisine have increased. The latest place though is a hidden gem; nestled in my town, off the beaten path, Luis’s Arepera & Grill is like a diamond in the rough. 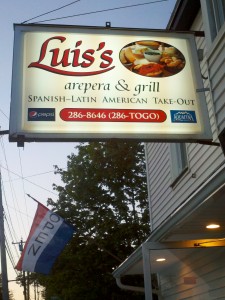 Luis’s is  owned by a Venezuelan fella by the name of Luis…no surprise but this joint literally just opened up and after a great meal and talk with the owner I figured I had to share this place with Mainers. I really want no need this place to stick around. His specialty is empanadas and a Venezuelan treat called an arepera that is fricking tasty! I had the arepitas sampler, 6 minis with a variety of stuffing’s and they were delicious, though my favorite was probably the ground beef. Luis’s carries a nice selection of vegetarian options and with the college kid coming home soon it means it’s one of the few places that the meat eaters and the vegetarian will all be able to eat. For lunch time Luis’s carries a few specials such as the Pebello traditional Venezuelan plate that is rice, black beans, beef or chicken and plantain. The menu description alone made my mouth water.

This fabulous place even offers churros, which while smaller than a traditional Mexican churro was almost identical taste-wise and the Spousal Unit was in hog heaven with his orchata which was about 24 ounces for a mere $2. Hands down the best orchata we have had since moving to Maine.

So, while I am hardly a restaurant reviewer, let me just say all item are made to order and fresh. The menu is small but with nothing on the menu higher than $10, it’s a great treat. Only downside is there is little on-site seating, one table and a few stools in the bar area and 2 benches outside, but if one is in the area, there are ample green space. So Mainers or visitors if you find yourself in Saco, check out Luis’s Arepera & Grill, open every day 9am-9pm except Sat, Luis’s is located at 213 North Street and hey he even accepts plastic which is nice for a small place since many local places are cash only.

PS: Excuse the crappy photos, never said I was a photographer, trust me though the food was good!