Due to a hectic work schedule, over the next few weeks I will have some fine bloggers helping me out since reality smacked me in the head yesterday and I realized, something has to give. Today’s post is by my partner, also known legally as my husband or as I fondly call him the Spousal Unit. Cha…cha…cha…changes by Deacon Blue

Being the “spousal unit” to Black Girl in Maine for going on our 14th year soon, and having a couple years of dating BGIM before that, it has been a pleasure and honor (and sometimes harrowing experience, too) to watch her develop over the years.

Ever since we first met, she’s been a fully actualized adult, complete with a kid nearly four years old when we started dating. She’s never been a fainting flower or helpless damsel in distress. But still, there has been a lot of growth and change over the years, most of it for the positive.

Watching that, and being awed by it at times…and being a catalyst for some changes…is a fascinating thing.

Fascinating enough, it turns out, to be near-oblivious to my own changes and growth.

I was a really awkward nerd when I first asked BGIM out. She’s mentioned before, as have I, that the only reason I got that first date was because her mother said, “The worst that can happen is you get a free dinner.” The rest, as they say, is history, as I was apparently engaging enough to warrant a second date just a few days later and then a steady dating gig thereafter.

Over the years, I haven’t stopped being a nerd and a geek at times (OK, often), but BGIM has helped mold me and guide me toward being a guy with, as she puts it, “an aging skate punk style.” I’ve played with my facial hair styles, I’ve removed my hair once receding hairline and bald spot became too intense, and I’ve become more assertive over the years (granted, that last item has led to some arguments at times, but mostly, BGIM seems happy I stand up for myself more readily with her).

To me, though, I’ve never thought of myself as anything all that special. Oh, I know I’m a good guy and I know I have intelligence and gobs of writing talent. But I don’t think of myself as an outstanding personality.

So, it takes me aback at times when I find out I have a major impact on others.

To know that my stepson sees me as a role model along with his mom and his dad.

To know that my presence and encouragement has helped my wife become a writer herself, a holder of two degrees, and more.

To find out that apparently I can be sexy to someone other than my wife (though I usually don’t realize women are checking me out or flirting with me…from grocery clerks to women eating near us or whomever…until BGIM or my stepson tell me afterward).

But now that I’ve become more aware, albeit slowly, of my own growth and change—much of it major—and of my own impact on the world, I’m not getting full of myself. I’m not cocky. I’m not egocentric. But I am taking control of my life. I’m claiming my life for myself. I still live it in part for my wife, my daughter and my stepson. Friends and other family members are still important to me. But it’s become clear that I need more ownership of myself to do things FOR myself. To declare that I am not simply a creation of the world but also a creator.

And so it is that I have taken ownership of my life by staking a claim on my flesh. By making myself art. By making an overt and conscious change.

By getting a tattoo.

OK, laugh if you will that I’m just another Gen X wanna-be hipster who’s seen too many episodes of “L.A. Ink” (truth be told, I haven’t seen any, though I did see a couple of the tattoo reality show based in New York, whatever the hell IT’S called). Tell me that I’ll regret this a few years or decades from now (if I’m still alive decades from now). But it’s not some chasing after a trend. This is a statement. Like all statements, it might not be received well by everyone. Hell, my dad will likely give me some grief when he realizes my forearm is largely covered in a colorful tattoo now.

The thing is, the tune to which I dance as I enter middle age isn’t everyone’s tune. And mine included a dance with a needle gun for nearly two hours at the hands of a seasoned tattoo artist.

My mid-life isn’t a crisis (though at times, there are crises to be had). It’s a transition. I could have gotten the red sports car and trophy girlfriend with whom to connect so hotly that I leave my family. But I didn’t. Instead, I’ve decided to explore some whole new territories, another interesting twist in my life in that regard being my erotica writing.

My midlife, far from being a crisis, is a a redesign. And just like a magazine that goes through the process, my underlying mission, content and character remain mostly the same. It’s the appearance and approach that are changing, to make me a better me (or so I hope).

No, no crisis here. Just realizing at around the middle (if all goes well) of my life, more or less, that this is MY life. There are others who occupy it as well, and I take them into account, but less and less do I give a rat’s ass what the world expects of me. I’m not a product. I’m a human.

The tattoo, of Quetzalcoatl, an Aztec god, is just one overt representation of that. I don’t care if the average person says, “Cool dragon” while totally missing the fact it isn’t a dragon at all. It’s not about them, though I’m happy to give them some eye candy.

No, this is a god of arts, crafts, knowledge, learning and priesthood that adorns me. It defines most of the things that define me at my core, and honors a culture long gone as well as the aspirations and directions that my Jesus-based spiritual journey entail.

Oh, and here’s that new tattoo: 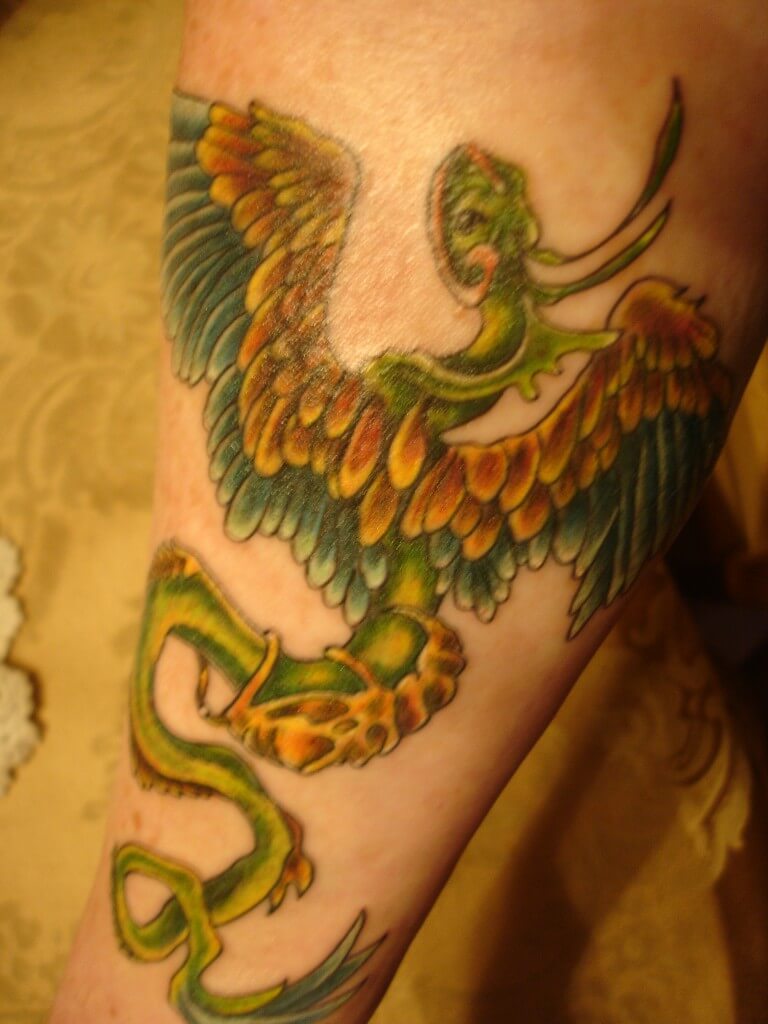