Living in Maine as a Black woman is an adventure; at the very least, I get my fair share of ribbing. After all, are there even Black people in Maine? All jokes aside, there are more than a few Black folks in Maine and one in particular who is trying to shatter a glass ceiling here in our fair state.

The Talbot name is well known throughout the state of Maine. The Talbots are a rare Black family in Maine whose roots go back many generations. Gerald Talbot made history in 1972 when he became the first Black member of the Maine House of Representatives and today his daughter, Rachel Talbot Ross, is running for a seat in the Maine House to represent part of our most populous and diverse city, Portland. 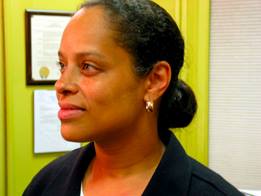 Rachel comes from a long line of hardworking, working-class Mainers who happen to be Black and who have dedicated their lives to making this state just a little better. As someone from away, when I first settled into Maine years ago, Rachel’s name was one that constantly came up. Rachel served as Portland’s Director of Equal Opportunity and Multicultural Affairs for many years and currently serves as the chapter president for the Portland Chapter of the NAACP as well as the lead director for the King Fellows, a group of youth working to advance racial equity.

After years of crossing paths with Rachel but never really taking the chance to talk to her, in the past year I have gotten to know Rachel better and her intersectional approach to change is one that I personally believe in. Rachel understands that when we look at inequity we must look at underlying systemic reasons for inequality and that our approach to change requires wholesale buy-in—not lip service, which too often is the norm even in our liberal and progressive spaces.

Yet the challenges that Rachel faces are real. There are few people who are without an opinion on the Talbot family, specifically Rachel, and as I know all too well as a Black woman that intensity and passion for change expressed by a Black woman is far too often read as anger. Rachel will be the first to admit that she has made missteps, yet she brings a desire for change to the race as well as decades of lived experiences. Her past success in her advocacy work include pushing for the legislature to ban racial profiling,  which led to the implementation of new training and policies in Maine’s law enforcement agencies. She has also worked against abuse of solitary confinement and restraints in jails and to protect the voting rights of incarcerated Mainers. You can read more about her platform here.

What I do want to talk about though is the uphill battle Rachel faces in a state that has little in the way of diverse representation. The state of Maine has had several Black men in the legislature, and we currently have Craig Hickman, who is a Harvard graduate turned farmer/small businessman serving in the state legislature. Yet we have never seen a Black woman serve in the state legislature…one might say it’s almost the last frontier in a year where we have seen Hillary Clinton bust through the last big barrier for women. But as we all know (or at least should, because actually, many people refuse to acknowledge it), not all women are created equal. For Black women, we wear the double crowns of our Blackness and our womanhood, a lens of duality. Given that Rachel is up against a young, progressive white woman and a former state representative, the challenge is real. Throw in the fact that Maine lacks the type of Black leadership and organizing that exists in spaces with larger Black communities and it’s one of the reasons that I am penning this post. Because while I am pro-equality, I am also a believer in supporting my own, especially when they traditionally have been kept out of the system or pushed to the side within it. People who are daring to make change against the odds and willing to stand in the fire knowing that it will hurt but who trust that we can make a difference.

If we want to truly create change, we need to “dare greatly,” and I believe that voting for Rachel is that chance to dare greatly with a woman who lives on the crossroads and who walks the talk. Sadly, I am not in Rachel’s district so I can’t vote for her, but I would encourage all who can to vote for Rachel to look at her record and platform as well as her passion and dedication. In a year that many are with her, let’s be with the “her” in our own back yard. Let me make it clear: I am not saying to vote for my friend and colleague because she is a Black woman, I am saying vote for a woman who is tried and tested, who happens to be Black, knowing that in doing so, we our creating a new trajectory in our state.
____________________________________
If this piece or this blog resonates with you, please consider a one-time “tip” or become a monthly “patron”…this space runs on love and reader support.

2 thoughts on “Break the glass in Maine…A Black woman in our legislature?”