Today we have another post written by BGIM contributor Teddy Burrage, a Portland, Maine, native and local activist and organizer. When he’s not writing or working, you can usually find him exploring Maine’s vast interior and coastline.

Advocate.com reported that 22 trans people were murdered this year in the United States. Of those 22, all but three were women of color. These numbers exclude unreported cases and those in which the victim was misgendered by the law enforcement and media—a common occurrence despite journalistic standards established by the New York Times and Associated Press. The figure also does not include instances of violence where the victim survived.

Living at the intersection of racism, transphobia, misogyny, homophobia—and in many cases poverty—transwomen of color bear the burden of simultaneously having to navigate multiple systems of oppression. Sadly because of this reality, this year is likely going to surpass 2015 as the deadliest year for transwomen of color in the United States. To add insult to injury, none the cases have been tried as hate crimes.

(Currently, only 9 states provided protection against hate crimes for transgender individuals. And in many courts, while condemned by the American Bar Association, “trans panic” is an acceptable defense for killing or assaulting someone.)

The act of taking someone’s life capstones a hierarchy of oppressive behaviors—behaviors each of us have a stake in whether we’d like to admit it or not. Jokes that make fun of men wearing dresses. Ideas that women are weaker than men. Feelings that it’s okay to touch people without their consent. These all provide a foundation for the dehumanization of others.

In a similar fashion, our society has always fetishized and commoditized black women’s bodies.

According to a study by Iman Cooper of Earlman College, the origins of this objectification can be traced back to the dynamics of plantation life when black slave women were forced to tend to the sexual impropriety of their white male masters.  In the same period, the maternal yet desexualized mammy caricature arose (see: Aunt Jemima) which was a pervasive image through the 17th century. The mammy archetype represented a big, happy woman who lived to serve white families, including even nursing their children. 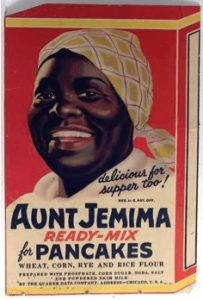 Even in the decades after slavery, black women often worked as domestics, having to sacrifice their life to serve their white bosses, while also having to keep their own families afloat.

Today, we see political pundits criticizing Michelle Obama for her exposing her shoulders and pop stars like Taylor Swift and Miley Cyrus using black women as props in their performances.

Exploiting black women for their value and talent has a long history in this country and around the world. The reductive nature of exploitation, combined with the complex insecurities that often surround gender and sexuality, likely plays a large role in violence against women—especially transwomen of color.

On the surface, it’s easy to assess violence solely on a case-by-case basis. But just as we’ve seen within those gruesome videos of police killings, there’s often a direct line leading from the incident to a deeper history that implies larger social norms and mores.

As Rev. Dr. Martin Luther King, Jr. famously said, “We must learn to live together as brothers or perish together as fools.” It’s a sentiment that states that our destinies are intrinsically bound. It’s something we should continuously remember as we move forward in pursuit of freedom.

“UPDATE: Since this article was written, yet another black transwoman has been murdered, Brandi Bledsoe, 32 of Cleveland, Ohio. This is a sobering reminder that violence is being perpetrated against trans people even as you read this blog.”