This past week was school vacation week here in New England. Between the Brother’s Evil in Boston mucking up our plans to visit the Museum of Science and that pesky job of mine turning me into an indentured servant, we really didn’t do much. However late in the week when it was clear that the seven year old was going to snap if I didn’t give her some much needed Mama-daughter time, I decided a trip to the mall was the perfect way to blow off some steam. My toes were in dire need of some TLC and the girl child had been asking if she could get her nails done too.

After we enjoyed a relaxing visit to the mall nail shop aka the McDonald’s of the nail world, we wandered around and stopped in Claire’s. Claire’s for those not in the know is an accessory shop that seems specially designed for girls 7-14 since I am pretty certain that no one over 15 years of age really shops there. Cute and completely disposable items that most of the time are a complete waste of money but I am sure if I were a little girl, I would love the place.

Of course since the idea of the mall visit was to hang out and browse, we did just that until seven found a necklace she had to have and negotiated a loan on her savings. It was a two pack necklace set designed for best friends. Tacky and cute all rolled into one…why the hell not? 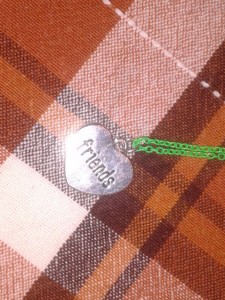 The only problem though was after buying the necklace, we had a mini crisis, and whoever would the kiddo give the other necklace to? After lamenting for some time I suggested she keep both necklaces since the truth is my daughter doesn’t have a best friend. Funny thing is neither do I. I have a small group of folks who have my back but a Sex and the City style group…nah.

So after the mini crisis over the necklace was averted I didn’t think anything of this issue of a best friend again until a few days later when the kiddo bought a new stuffie aka Miss La Fluff Fluff. A day after Miss La Fluff Fluff became a member of the BGIM household, according to the kiddo Fluff Fluff was causing her to pay less attention to Ruby the American Girl doll she has had for the past couple of years and damn it Mama…this is a crisis.

It seems that at almost 8 and in second grade, my luv, my daughter the child named after a most mighty Goddess is struggling because she wants a best friend. It’s a process and we are working through it but the past few days have brought up my own baggage around this best friend issue. Raising kids as I have learned in the past 21 years will bring up baggage even baggage we completely forgot about.

Back when BGIM was just a wee lass in Chicago, I was a pretty awkward kid. I was teased terribly by my family for “sounding white” and being bookish; needless to say I have exacted my revenge on the bulk of my extended family by growing up and forgetting that they exist. I am sure it didn’t help that I was a physically awkward kid to boot. To be honest, I never quite fit in, at least in my own head.  In elementary school, I was in a program for the performing arts. All the kids in the program were like a mini family (by the way one of the gals I knew when I was 10 is now married to the former Man Unit, so I guess we were like a family since this gal was one of the popular kids and now she is my son’s stepmother) and while we all got along, I always longed for that one best friend.

From second grade going forward every school year I would imagine myself to be best friends with this girl or that girl. Sometimes the feelings were shared and we would be like the Bobbsey twins for a spell but eventually our interests would change and the relationships would fade. I did luck out though in that many of the connections that I made in elementary school have endured over the years and many of us have reconnected thanks to Facebook. While our bonds are strong and we support each other, many of us are now spread out geographically and the day to day types of support that one thinks of with best friends is simply not possible. We are all too busy juggling all the balls in the air and trying not to drop em. So by day’s end there isn’t much to give aside from the occasional text or call unless one of us is in crisis.

Even in high school, I still wanted a best friend and instead ended up being the kid who literally got along with everyone but never quite made it to best friend status. Don’t get me wrong, I had friends but no one who was quite BFF material.

Of course running off at 18 to get married and becoming a mother at 19 pretty much killed the need/desire/whatever for a best friend but as the years have gone on, there are a handful of people who fill various roles in my life. There is one person who knows me as well as my husband and mother and knows where the bodies are buried. But we aren’t the talk on the phone, do everything together types. Our connection is forged by the fact that when shit hits the wall we are there for each other. When my mother died, this friend drove 8 hours with a newborn to come to the memorial service and literally hold me up. Afterwards, despite the fact she was nursing and needed to get back to her brand new baby she held my hand for hours at a diner as I alternately cried and chain smoked. After the dust settled from my mom’s death, we didn’t talk for two years. It’s our pattern, when life is well, we are in our own worlds but when the world blows up, we are there for one another. That said, she wasn’t in my wedding and I wasn’t in hers…nothing personal. Just didn’t work out that way. Yet when pressed, she might be the closest thing I have to a BFF but really I just have a small crew of people I love and adore and trust.

I wasted a lot of years wanting a best friend. In my search to meet that one person who would truly get me, I have spent many years getting to know all kinds of people and looking back on it, I am thankful for that experience. By not having a special group early on in life it forced me to learn how to connect with all kinds of people, which it turns out is a useful skill. I have been blessed to have women in my life who were at times 40-50 years older than me and each and every one of them brought something special to my life and has left their imprint.

There are times when I wish I had that one BFF, who I talk to weekly if not daily. For reasons unknown to me it was not to be; but at times I think that this idea of women having one best friend or one group of best friends is a media construct. While I know women who do have those types of relationships, I know many more that do not; instead their family members, mates, siblings, and parents often play those roles.

So for my precious babe, I am just going to continue suggesting that she make as many friends as possible and don’t worry about settling on a BFF as this stage in life, it will come with time.